Former Vice-President USA Joe Biden was ranked first in the list of 20 possible contenders for the presidency from the Democratic party. According to the results of a survey conducted in Iowa, his candidacy is ready to vote 32% of voters-Democrats. Second place went to Senator Bernie Sanders. The majority of respondents stated that they would support any candidate who “could win trump’s”, but would not like to see among the contenders Hillary Clinton. 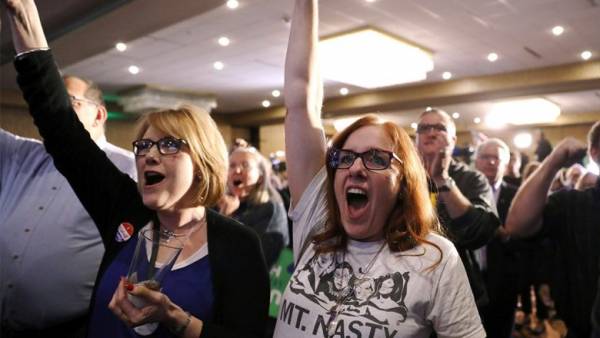 Iowa is traditionally the first U.S. begins preparations for the presidential elections, and it is in this state before all are the Caucus of electors, which is determined by which candidate can get the party nomination and take part in the final stage of the next presidential race.

Last weekend published the results of the first public opinion poll conducted in the state by CNN, the newspaper Des Moines Register and the study group’s Mediacom. The survey participants were the voters Democrats, who were asked to define their attitude towards the 20 potential candidates for the presidency in the elections of 2020.

First place in the voting with a large margin took the former us Vice-President Joe Biden. His candidature was named by 32%. Second place was awarded to Senator Bernie Sanders, who gathered 19% of the vote. The third went to the Congressman of the legislative Assembly of the state of Texas, Beto O’rourke, who rose to fame during the recent midterm elections. According to the survey in Iowa, he received 11% of votes.

The results of other representatives of the democratic party was much more modest: the Senator from Massachusetts Elizabeth Warren has collected only 8%, and the Senator from California Kamala Harris agreed to support only 5% of respondents. Other members of the list and are unable to overcome the five percent barrier.

The results of a survey in Iowa coincide with the data from the national survey, conducted by CNN at the end of last week. At the same time, sociologists note, if at the Federal level plays a major role fame of this or that politician, in Iowa, the campaign has already started and many candidates were able to speak to his supporters.

The majority of voters in Iowa, namely 54%, said that the main factor in the choice of candidate for them to be “the ability to win trump”, and only 40% of respondents said they would vote for the candidate whose positions on the most important issues they share.

Most are also willing to support the “experienced and well-known policy”, considering that a novice can hardly win the fight against the current occupant of the White house. At least it is in favor of experience in favor 49% of respondents, and for appearing in a batch of new faces voted only 36% of study participants.

At the same time, 52% of voters said that would only deal with one, even with a “very strong candidate” and would prefer to make a choice after the primary election, will attend the maximum possible number of candidates for the party nomination.

The vast majority of respondents said that in the upcoming elections they would be ready to vote for any representative of the Democratic party. The only exception was Hillary Clinton.

According to 72% of the respondents participate in the election of the former first lady of the United States may become a negative factor, but her views are not shared by 49% of respondents.

While none of the democratic politicians, has not formally announced its desire to participate in the upcoming presidential race. In a recent interview, however, Hillary Clinton said that “could be a good President.” In turn, former us Vice-President Joe Biden last week said he is “most qualified” candidate for this position.

According to us media reports, Mr. Biden in recent months engaged in consultations with his advisers, assessing their chances of election in 2020. As a possible candidate for Vice-President is often called the Congressman from Texas, Beto O’rourke, with whom Joe Biden reportedly already held several meetings. Representatives of former Vice-President of the USA while this information does not comment.