According to the Belarusian President, the prices of fuel for his country is worse than Germany. 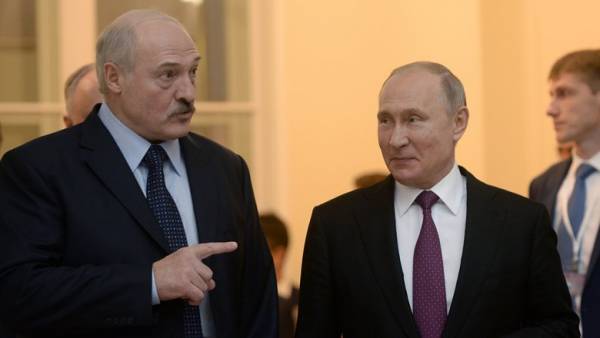 The presidents of Russia and Belarus Vladimir Putin and Alexander Lukashenko at the summit of the leaders of the Eurasian economic Union (EEU) to publicly argue about the price of Russian gas for Belarus.

According to Lukashenko, the rate used by Gazprom to transport gas from the Yamal-Nenets Autonomous district to Byelorussia, is almost $3 for 1,000 cubic meters per 100 km, while the tariff for Russian consumers — about $1, that is, three times less.

As a result of Russian gas for Belarus costs about $130 per 1,000 cubic meters, but the wholesale price to consumers of the Smolensk region (border with Belarus) is almost twice lower — $70.

In the structure of gas prices for Belarus the share of fees for transportation through the territory of Russia exceeds 70%, Lukashenka noted.

Putin offered Lukashenko to discuss this question in the closed part of the meeting. The Russian President advised the Belarusian authorities to look at the tariff for pumping gas, and the final price of fuel. “Today Belarus is $129 per 1,000 cubic meters, next year will be $127, and in Germany — $250, — Putin said. — It’s definitely a big advantage to our allies in the EEU, although of course we should strive for unification, but this takes time and a different level of integration between our countries”.

According to the Russian President if Russia to sell Belarus gas at market price, it would be under $200.

“Vladimir Vladimirovich, that you wrong conditions. We have worse conditions than Germany, continued Lukashenko.”

Like the war against Germany together. They have $200 and we have $130 because there are still 3000 km pump is necessary.Alexander Lucasentertainment Belarus

Lukashenko reminded Putin that the Eurasian Union was created for the free movement of goods between the countries which it includes, and the different pricing of fuel for Russian and Belarusian consumers, this is impossible. “Simple question — how to compete in this situation?” — outraged Lukashenko.

The lack of agreement on common oil and gas market does not allow the Union to progress more rapidly, he said. According to the Belarusian President, on change to eliminate barriers to the EEU built new. Emerging trade disputes, he called the chance for the EEU.

Shopping войны5 Dec”Tariff of people,” trump has brought down the stock рынки19 nabredete Medvedev: no winners in a trade war is not будет2 noretron decided to conclude a truce with Itemcode is this squabble, unite, unite and give greater momentum in our economic Union.Alexander Lucasentertainment Belarus

A year later, the EAEC will be five years, and at this point should produce results that no one had any doubt that the Union was a successful project, concluded the President of Belarus.

Following the meeting, the leaders of countries in the Eurasian economic Union, approved the program of formation of common markets of gas, oil and oil by 2025, Chairman of the Board of the Eurasian economic Commission Tigran Sargsyan. According to him, the presidents agreed to discuss methods of determining the price of transit of gas. “This is one of the major and controversial issues that we face”, — declared Sargsyan.