The presidential Council of the Russian Federation on human rights (HRC) criticized the decision on Wednesday, the decision of the Tver district court of Moscow about the arrest of a 25 day 77-year-old Chairman of the human rights movement “For human rights” Lev Ponomarev. Mr. Ponomarev was found guilty of a second violation of order of holding mass events before action “For our and your children” October 28, at the Lubyanka. The head of the HRC Mikhail Fedotov expressed hope that the Moscow city court on appeal will change the decision. 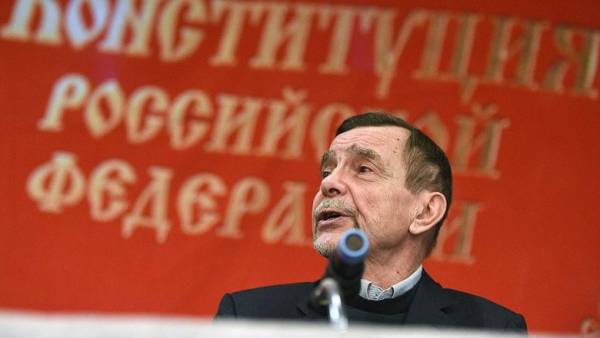 The head of the HRC Mikhail Fedotov, on behalf of the Council expressed outrage at the court’s decision to send 77-year-old human rights activist Lev Ponomarev for 25 days under arrest. “We in the Council hope that the Minister will reconsider this inexplicable decision,” said Mr. Fedotov. He noted that of course, the court may appoint any punishment within the sanction of article of the administrative code, “but any sane person understands that the law is on it and gives a very wide range of sentences to personalize it to fit the personality of the person, his age, state of health and real social danger of the offense”.

“In this case, I am convinced that the court could limit the fine,” said Mr. Fedotov.

“In its decision, the Tver court jeopardizes the life and health Lev Ponomarev, in violation of his constitutional rights,” — said a member of the HRC, the journalist Ekaterina Vinokurova.

We will remind, on Wednesday, the Tverskoy district court of Moscow examined the case against the Chairman of the human rights movement “For human rights” Lev Ponomarev, finding him guilty under part 8 of article 20.2 of the administrative code (repeated violation of the rules of holding mass events). The penalty is a fine of from 150 to 300 thousand rubles or arrest for up to 30 days. Mr. Ponomarev was charged with publishing a post on the social network, urging them to participate in the campaign “For our and your children” in support of the defendants “Penza things” and the “New grandeur”, which took place on 28 October in Lubyanka square. The defendants in both cases — young people who are accused of creation of terrorist and extremist communities.

The action was not agreed upon, it was held in several Russian cities, arrested about 40 people.

“This summer, Lev Ponomarev was detained by the Prosecutor General’s office, where he spent a single picket with a demand to change the measure of restraint 19-year-old Mary Dubovik and 18-year-old Anne of Pavlikova who were in jail in the case of the “New greatness”. He was found guilty under part 5 of article 20.2 of the administrative code. And finally today the violation was repeated”, — explained “Kommersant” a public defender of mister Ponomareva Irina Yatsenko. According to her, the judgment will be appealed.

As consider colleagues of Mr. Ponomarev, a long arrest may be associated with the reluctance of the municipality to negotiate a rally against violence on Pushkin square on 16 December, which was initiated by the defender.

“Repeated bringing to administrative responsibility during the year means that a person cannot be a claimant of the shares. And this arrest can be used as a formal reason for the refusal to reconcile,” says Ms. Yatsenko. She recalled that the last time Mr. Ponomarev has been arrested in December 2015, when it was sent to the infirmary for two days for pickets on Constitution Day.