Clinton spoke about his friendship with Bush Sr.

MOSCOW, 1 Dec — RIA Novosti. Friendship with the 41st U.S. President George H. W. Bush was one of the best gifts in life, these relations will remain forever in the memory, said the 42nd U.S. President bill Clinton. 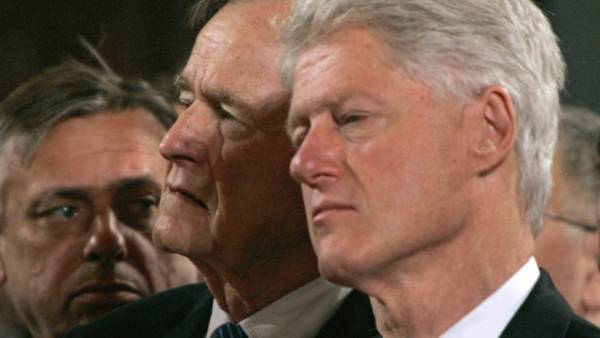 George Bush the elder died in the night on Saturday.

“I Express deep gratitude for every moment I spent with President Bush. In my memory will remain forever our friendship, which was one of the best gifts in my life,” — said in a joint statement, bill and Hillary Clinton, published on the website of the Clinton Foundation.

Bill Clinton also said that Bush the elder never ceased to serve his country and has always shown generosity and outstanding leadership.

“He never ceased to serve the Fatherland. I’ve seen it up close when I worked with him on the tsunami relief efforts in Asia and here at home following hurricane Katrina. He has always shown outstanding leadership and generosity,” reads the statement of the spouses Clinton.

“Hillary and I mourn the passing of President George W. Bush… Our hearts and prayers are with George, Jeb, Neil, Marvin, Doro, their families and all generation of the Bush family,” reads the statement.

Bush took the presidency, 1989-1993. International policies pursued by the Bush, marked by military operations conducted in Panama, the Philippines and the Persian Gulf. The elder Bush also served as the 11th Director of the Central intelligence Agency (1976-1977) and the 43rd Vice President of the United States (1981-1989). In April of this year, has left the life of the wife of Bush — Barbara Bush, with whom he lived 73 years.

See also: the Son of a banker, father of the President: biography of George H. W. Bush