And what will it take in Russia and Norway. 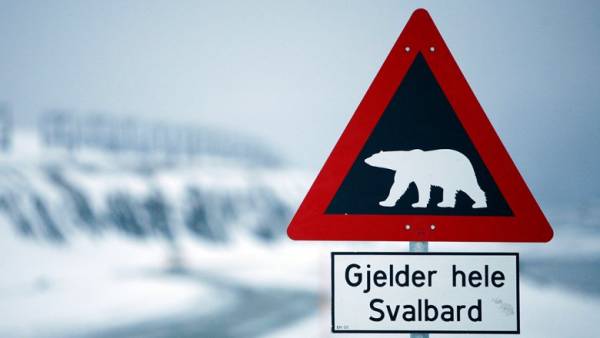 The first national standard of conduct when dealing with polar bears can be developed in Russia within the next year this was announced at the forum “the Arctic Days in Moscow”, which took place from 21 to 25 November. Meanwhile, given the growing interest in the development of the Arctic, the question of how to ensure the peaceful coexistence of the threatened extermination of the threat of predators and people living or working in the circumpolar territories, has recently become particularly relevant. How often these meetings occur and what the rules already provided in this case, to understand “news”.

In developing a new standard can take part several dozens of enterprises and agencies, it is expected that he will arrive in Rosstandart for the next year, as reported by TASS, the forum said the Chairman of the technical Committee on standardization № 187 “research in polar regions” of Rosstandart, the Director scientifically-information centre “Arctic initiative” Nikita Kuprikov.

The rules are aimed primarily at employees of companies who come North to work, but they will affect the existing residents in the Arctic villages. The basis is planned to take the recommendations previously developed by the “Society of wildlife” and Institute of problems of ecology and evolution them. A. N. Severtsov Russian Academy of Sciences.

Journalists a few days, watched death of a penguin broke down and intervened

“They [the recommendations. — Approx. ed.] was made on the basis of knowledge of the biology of the animal. This applies to all areas of interaction: that it is impossible to feed, how to scare away or why not take the cubs of a predator in hand”, — quotes Agency the words of the Executive Director of the “Society of wildlife” Anton Berseneva.

In addition, the number of proposals — construction of fences around the sites of permanent human habitation. For example, schools or kindergartens.

Polar bears are considered the largest predator in the Arctic and one of the most dangerous in the world. Including to humans. During the last decades their number steadily declined, so today, according to the international classification, they relate to vulnerable species and therefore are protected.

Officially to use the weapon when you meet them it is possible only in one case — if the bear attacked. According to the testimony of ecologists and inhabitants of the Northern regions, in reality this happens very rarely, we are talking about isolated cases for decades, however, to determine after the fact whether it was about danger to humans, almost impossible.

Meanwhile, meetings with them were regularly reported by the researchers, travelers, members of scientific expeditions, and volunteers working in the Arctic Islands. While sparsely populated Northern lands with them are often faced not only by the explorers wintering on remote stations, but residents of regular settlements. Predators come there including in search of food, attracted by the remains of the carcasses of slaughtered locals seals and whales, and also because these areas are their migration paths.

One of the most striking examples are located in the territory of the Chukotka Autonomous Okrug village of ryrkaypiy. The village, which is inhabited by about 600 people, is located in front of the Wrangel island reserve, which is also called the “home of the polar bears”. On it are hundreds of predators. Every year, when it comes to the ice, they go to the mainland territories of the migratory route, which runs past the village of ryrkaypiy. And if the ice gets up later than usual or close to the coast remains a large amount of food left by hunters, the number of bears in the area can reach several tens. Then, the national media are starting to appear the news about the village, “surrounded by the” polar bears, as it was in 2017 and 2018. Go bears, as a rule, only in January and February.

It is believed that in the Chukotka Autonomous district today is home to the largest in the world population of polar bears. However, its habitat extends to almost all the circumpolar area, and therefore, predators is a problem common to all Arctic regions.

For example, they regularly meet with residents of the Spitsbergen archipelago, with a population of about 2.6 thousand people: scientists and researchers, as well as those who live in local villages on a permanent basis. Another part of people come to conduct time studies. The area of the archipelago is a little more than 60 thousand square km (almost 30 times the area of Moscow), while inhabited, in fact, is the only Western Spitsbergen, an area of nearly 40 thousand square kilometers and a population of about 2 thousand people.

Throughout the archipelago there are only eight villages, three of which have been preserved, and the rest of the population does not exceed several hundred people. The only exception is the capital of Svalbard — the Norwegian town of Longyearbyen. There lives more than 1.5 thousand people. But even in its vicinity, a meeting with the bear remains very likely. In may 2018 the media specialized for life in the Arctic regions, said that one of the predators almost went to the limits of the city. To meet him then went personally the Governor of the archipelago (which is under the jurisdiction of Norway), concurrently head of the local police. To scare predators away, which happens to the human houses listened with interest rather than with fear, was only using the included sirens and flashing lights.

In July 2018, the media also has photos of the bear, “occupied” a small hotel building in the territory of one of the Islands of the archipelago. He made his way into the home through the garage, the beast gave it a rout, but couldn’t get out and was caught by staff “on scene”. Realizing that to release it independently, they can not, the staff at the radio asked for help from the authorities of Spitsbergen. They sent a helicopter with specialists, but in the end their support was not required — frightened by the noise, the bear managed to escape through a window, injuring the paw. If the wound is a threat to him, arrived at the vet to determine he couldn’t, because the bear walked quickly to the water and disappeared. A hotel representative then told that it was the second such case since the beginning of the year, but the first predator was able to escape before the appearance of humans: their guests they asked to be extremely cautious.