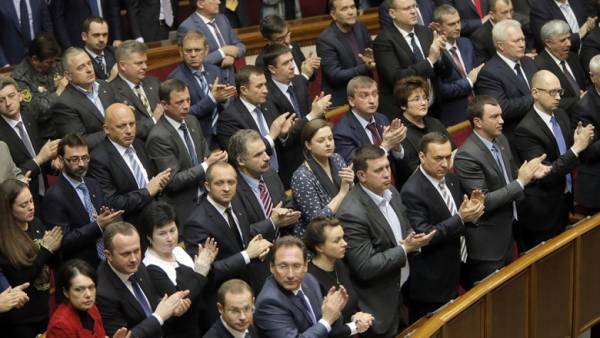 According to the head of the Parliament Committee on international policy, Anna hopko, “the decision of Rada asks international organizations to provide assistance to the detainees Russian Ukrainian sailors to strengthen sanctions against Russia, to send observers to the region of the Kerch Strait, to prevent the escalation of the conflict and to provide military assistance to Ukraine”.

Sunday, November 25, three ships of naval forces of Ukraine violated in the Kerch Strait the current rules of the passage from the Black to the Azov sea. For legal requirements of boats of the border service of FSB of the Russian Federation and the Russian black sea fleet to stop the ships did not respond and continued driving. For their compulsory stop was used weapons. Three servicemen of the Ukrainian Navy, was slightly injured, they received medical assistance. Ships detained. For violation of the state border of the Russian Federation initiated a criminal case. The evening of the same day on the orders of President Petro Poroshenko’s national security Council and defense of Ukraine adopted a decision on the introduction of martial law.