The conflict between Russia and Ukraine in the Black sea. What happened 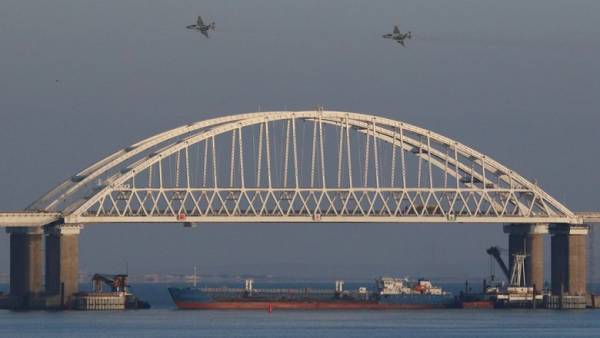 The chronology of events in Black sea

In the morning, 25 November, the press service of the Ukrainian Navy reported that two Ukrainian boats — “Berdyansk” and “Nikopol”, as well as inshore tug “Yana Kapu” planning shifted from the port of Odessa to the port of Mariupol of the Azov sea. However, the Russian ships had taken “aggressive actions”: border cruiser “don” rammed the tug. Navigation through the Kerch Strait are regulated by Russian authorities, who, according to the Ukrainian Navy, on the eve of received information about the movement of Ukrainian ships.

After about an hour the incident was commented by the Federal security service of Russia. The Minister said that the two artillery boats and tug naval forces of Ukraine illegally crossed the border from Russia and headed to the Kerch Strait.

Applications for the passage of ships of Ukraine has not been filed.

Later, around 11.30 Moscow time, Ukraine sent towards the Crimean bridge two gun boats, reported the press service of the Navy of the country and the Crimean border guard service. The boat was stopped by the coast guard near the border of Russian territorial waters in the sea of Azov.

Around noon, passage of ships through the Kerch Strait was closed. This arches across the Crimean bridge was exhibited on the ship. Russia sent to the bridge su-25 and attack helicopters Ka-52 Russian space forces, as evidenced by photos and videos posted by the sites of Kerch. net and “Kerch. info”. The passage under the bridge was briefly opened only for the Russian minesweeper “Vice-Admiral Zakhar’in” and two Russian artillery boat project in 1204.

During the resurrection the fate of the Ukrainian boat and the boat was unclear. However, the Ukrainian side said about the shelling and the detention of their ships by Russian border guards. According to the Ukrainian side, six troops were injured. The FSB confirmed the use of weapons in the territorial waters of Russia against a Ukrainian ship. As reported by the office, three wounded Ukrainian military medical assistance, threats to their life there. Criminal case about violation of the Russian border.

The President of Ukraine Petro Poroshenko on Sunday evening convened a war Cabinet — a body comprised of the heads of state and power structures. Following the meeting, the Secretary of national security and defense Council (NSDC) of Ukraine Oleksandr Turchynov said that Russia has taken an act of military aggression.

Then at a meeting of the national security Council decided to send to the Verkhovna Rada documents for the introduction of state of emergency for 60 days. Parliament on Monday to approve or reject this idea.

Poroshenko stressed that the military situation does not mean immediate mobilization of the army and the conduct of Ukraine’s offensive actions. At the same time he announced the preparatory work with the reserve of the first stage.

Ukrainian foreign Ministry appealed to the allies and partners with a request to introduce new and strengthen the existing sanctions “to deter the aggressor,” and to provide military assistance to Ukraine.