Chechen Imam and his unusual Pets

To see camels, deer and peacocks can not only in the zoo — near Grozny live on a farm, where these animals graze along with the horses and cows. That’s only with ostriches, you should be careful. 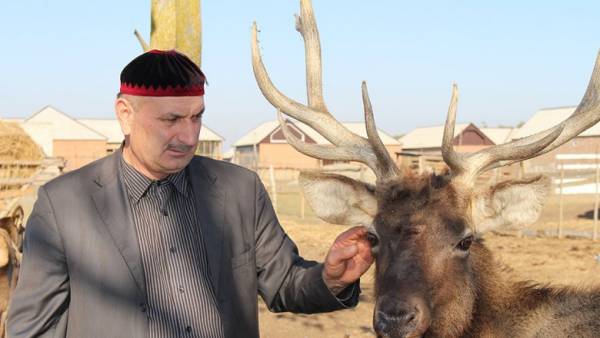 Hussein in the village know it all. None shall pass and will not pass by without saying Hello. And no wonder — he is the Imam of the local mosque. It is surprising that Hussein know and far beyond the village as the owner of an unusual farm, where they raised exotic animals.

Wherever you go — to get Hussein

Paraboch small village of just 500 inhabitants located 70 km from Grozny. Among tourists it is known primarily thanks to the Literary Museum named after Mikhail Lermontov. The poet visited these places first child with her grandmother, who came to the estate Halatovych “Earthly Paradise”, and then during the Caucasian link.

But today we’re going to another “earthly Paradise” — into the possession of Hussein Musaeva.

To meet us, as agreed, the Imam but couldn’t delay the funeral. In order not to stray, ask directions from a local resident.

— If you’re heading down that street — he waves his hand to the right — that rested in his house, if just for this, in his farm, if you go to the center, will be at the mosque. In General, wherever you go, Hussein will fall — smiling man.

In the absence of the owner the choice of the road is obvious: a direct course to the farm with the animals.

First we were greeted by a huge ostriches. Behind him, he saw the dilapidated outbuildings. The birds looked well groomed and happy. They immediately came to the fence and began curiously to look at the guests: who here another fan selfie or a treat brought? We didn’t have time to get to know how the cage came up and Hussein. Ostriches gladly switched to it — recognized provider.

From the first glance it is clear that Hussein Tusev — the owner, the working man, loves his job, he knows his price.

— I’m under 60. Neither the Minister nor the Director, I can’t be, and has never sought. I am a lifelong farmer, doing what you were doing since childhood, and my place is here, — confidently says Hussein.

He was born and raised in the mountain village Dettah. When in 90-m to year in the village came down a landslide, their house was damaged, and the family was forced to leave. The choice fell on Paraboch.

— There was forestry work, technology. The first time he worked on the tractor. It still stands in my yard. Without him the farm is not enough. On a mountain edge I miss very much, and often travel there, the dream to build a house there. I left my heart in the mountains.

No day without work

To wajibat for livestock and poultry Hussein learned from his father helped him since childhood. When the father died, the guy had to take the economy in their hands. With 20 years he is the only breadwinner in the family.

— If father had lived, it would be easier to get to his feet. When behind is older, it gives strength, confidence, and when they go very hard. On the farm I work since eight years to the present day. This is my way of life. And I don’t regret my choice.

Farm Hussein is on two sites — near the house and three kilometers from the village.

Work almost around the clock: all feed (and food still to prepare and cook), water, milk, and much more. That’s not counting the interior landscaping areas.

Hussein says that he dreams one day to live without work.

Life and travelling the village of Booze

But such a day I never had — all weekdays, all weekends and holidays me and my animals. They do not say: today is a holiday, you will be without water, without food.

It was especially difficult during the hostilities in the 90-ies. The village Paraboch they have not touched, but the shelling and bombing were heard.

— When they began to explode the first bomb, the cattle rushed to our house. Many have even tried to go into it. It turns out that when something really bad is happening, animals are drawn to people trying to find protection. Then they were used to explosions and behaved calmly. The livestock we managed to keep. However, it was difficult to feed everyone. For food will not work, the hay mow was not around mines. They blew up two of my cows and one bull. In General, barely lasted. Survived. We and our frightened cattle. And then there was our exotic animals.