BEIJING, 19 Nov — RIA Novosti. His statements during the summit of APEC leaders has created an artificial controversy, ruined the atmosphere and did not contribute to reaching consensus, said on Monday foreign Ministry spokesman China Geng Shuang. 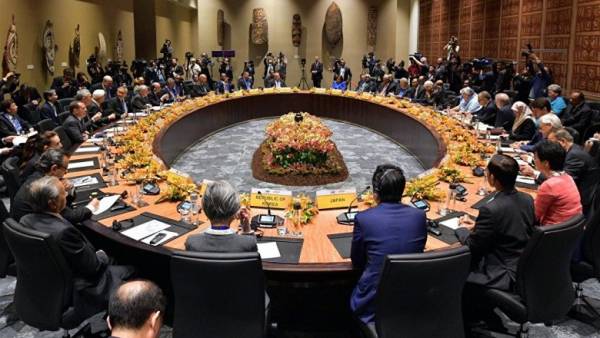 The APEC summit in 2018 was held in the capital of Papua New Guinea, Port Moresby, 17-18 Nov. For the first time since 1993, the summit ended without a joint Declaration of the leaders. The meeting took place against the backdrop of a trade war between China and the United States — the world’s largest economies, and a number of Western media reported about the tensions with the Chinese delegation in the preparation of the outcome document.

“The statements of the Chinese party was not directed against anyone and did not provoke anyone. However, all saw the performance of the American side. The U.S. side as if in anger, took part in the APEC summit. The American party made statements openly raised a few eyebrows, has created an artificial contradiction, spoil the atmosphere of the meetings and contributed to the achievement of consensus,” — said at the briefing, Geng Shuang.

He also stressed that the reason why leaders are unable to adopt a final communiqué of the APEC summit, is not one that calls the American side.

“Indeed, the APEC leaders did not accept the final statement. But the reason is not the one that calls the American side… According to my information, the policy of brute force and economic terrorism met opposition from the majority of the countries-participants”, — said the representative of the foreign Ministry of China.