St. PETERSBURG, 16 Oct — RIA Novosti. Russian President Vladimir Putin, who held a meeting on the problems of drug supply, drove to the pharmacy in Pushkin. The head of state explained that he wanted to make sure you have the required set of drugs at affordable prices in the free market. 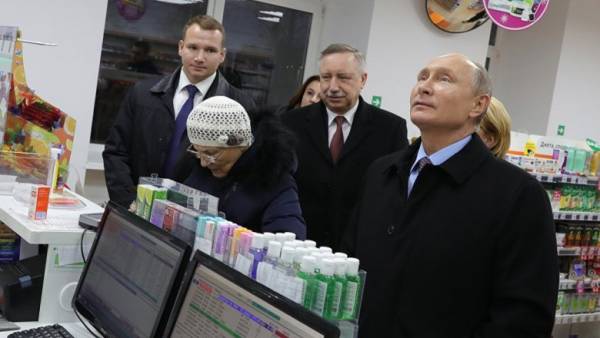 Putin was accompanied by Minister of health Veronika Skvortsova and the acting Governor of St. Petersburg Alexander Beglov went to the pharmacy on Railway street. “We went to the meeting, I offered to stay,” explained the President the duty pharmacist, who at that time served the customer. The head of state asked to invite the head of the pharmacy to find out whether there is available medicines of the first necessity.

Head of Olga Novikova said that there is continuous monitoring of availability of medicines from the list vital and necessary medicines, so they are always present on the counter. Novikov also said that the pharmacy has positioned itself as one of the cheapest in St. Petersburg and therefore is popular with local residents.

The President asked her what would she recommend to pay attention to the acting Governor Beglov. Head complained that the outlet is not allowed to have a large cross on the sign, so as not to spoil the historical appearance of the district. According to Novikova, the absence of this sign makes it difficult to find a pharmacy for potential buyers. “And we stopped here because I saw the sign”, — Putin smiled. Beglov has promised: “you will Understand, fix.”