The President noted that “in General, the provision of medicines in our country annually spends more than 380 billion rubles of budgetary funds”. 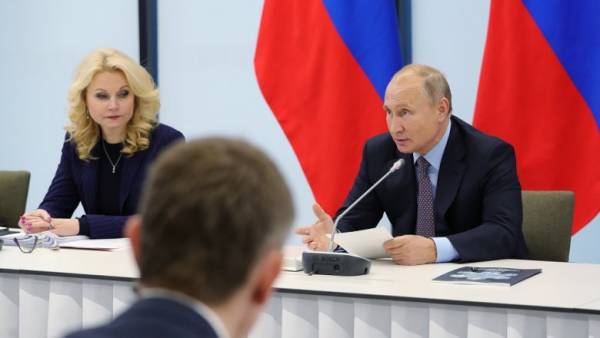 ST. PETERSBURG, November 16. /TASS/. The existing in Russia system of preferential provision of medicines unproductive and does not take into account the needs of a particular person, you need to restore order with the register of preferential categories of citizens, and with a list of drugs for them, said Russian President Vladimir Putin.

“It turns out that the existing system of preferential provision of medicines unproductive, unfortunately, does not take into account the needs of the individual. Obviously, it necessary to restore order with the register of preferential categories of citizens, and with a list of drugs for them,” Putin said at a meeting on the topic of improving the effectiveness of the system of drug provision in Russia.

During the meeting the head of state highlighted the problem of accessibility of soft drugs. “Today, for outpatient treatment they receive 19% of the country’s citizens is a good figure. But in practice we have, what we face: not in all regions it is known how many inhabitants has the right to subsidised medicines and how much are exemptions and some of the state programs”, — said Putin.

“This means that if there is no proper accounting, budget funneling money very often through the fingers and, most importantly, not all beneficiaries get the drugs they need,” he said.

He drew attention to “the disturbing factor of inequality in the financing of benefits”. “So, in 2017 the average cost of medication for one beneficiary differed in the regions of the Russian Federation more than seven times. I understand the interest of the well in once or twice, but seven times is too many”, — said Putin.

The President noted that in different regions differ and the lists of drugs which are available preferential categories of citizens. “I am not going to name these subjects of the Federation. In one area 554 of the names included in this list, another 317 and the third only 180. It is also no good I’m talking about the neighboring regions in the center of the country”, — continued the head of state.

This means that beneficiaries residing in one region make such drugs, while others are close — do not get, he said.

“Why? People can’t explain it. And, in fact, no need to explain. You just need to ensure the normal work”, — said Putin.

“As a result, the beneficiaries are often forced to pay for medication out of pocket. That is where it get discounted prescriptions, but somewhere just pay. And indignation at this state of Affairs is absolutely justified”, — he added.

The situation with suppliers

Putin urged to stop the negative practice of determining the regional authorities in circumvention of the principles of competition, the only suppliers of drugs that are often abused a monopoly position in the market by overcharging for medicines.

“Another important issue is the suppression of negative practices, when authorities in the region, ignoring the principles of competition, define a unique drug suppliers”, — said Putin.

He noted that as privileged performers are most likely to be local unitary enterprises.

“And God be with them, if they work properly. But, as a rule, not colleagues. These companies focus primarily on their own benefit and, unfortunately, very often abuse their monopoly position in the market, inflate prices just. And other suppliers not, because the only appointed”, — said the President.

“This leads to overvaluation, and hence to reduce the number of medications and number of people who receive them. To inefficient costs, in the end, the budget lead, and people suffering from it. We have already made decisions on these matters, I would like to hear what is done, and not just in words, but in essence, in fact,” — said Putin, addressing the participants of the meeting.

Putin also said about the necessity of providing citizens with medicines in required amount.