It was decorated with frescoes and, apparently, it was buried a man (or men) of the elite of the local society. 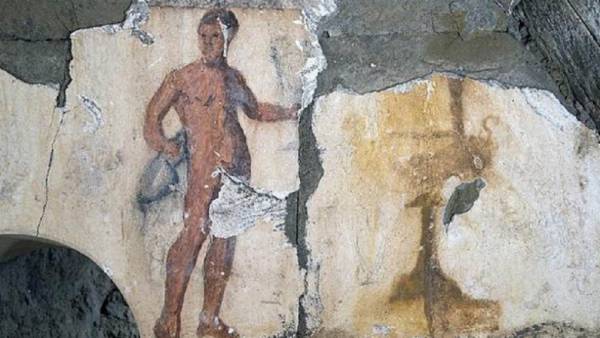 In the ruins of the city of Cuma near Naples archaeologists have discovered the tomb of the II century BC. According to a press release from the National center for scientific research of France, it was decorated with frescoes and, apparently, it was buried a man (or men) of the elite of the local society.

Cuma was the first Greek colony on the Apennine Peninsula. Apparently, the city was founded in the mid-eighth century BC by colonists from Euboea island. The colonists traded with inhabitants of the neighboring lands and spread Greek culture. They brought along Euboean alphabet, which later was borrowed by the Etruscans and then the Romans and on which was founded the Latin alphabet. Richer, the inhabitants of Qom was founded a new colony: Naples, Nola and Dicaearchia (Roman Puteoli) on the Peninsula, Zankl (Messina) in Sicily. Near Qom was a grotto in which lived the famous prophetess sibyl Kum. In the year 421 BC Kuma won tribe of the Samnites and in 343 year, the city came under the rule of the Romans. During the Second Punic war (218-201 years BC), when the Carthaginian General Hannibal captured many of the Roman territories, the city remained faithful to the Romans and withstood the siege by the Carthaginians.

Since 2001, year in the Archaeological Park of Campi Flegrei, in which there are the ruins of Qom, has been excavated by French archaeologists.

During excavations, researchers have discovered, including, necropolis, and tombs built of tufa.

They went through the entrance on the facade, which later was closed with a stone slab. Inside usually make a room with several burial boxes. In June 2018, scientists found the burial chamber decorated with frescoes. The burial was looted in nineteenth century, but the preserved remains of frescoes and traces conditions allowed us to date the II century BC. Above the entrance to the tomb preserved the image of the naked young men holding a bowl of wine and a vase. Presumably, the fresco depicted a feast, and on the side walls was a picture of the assembled guests.

For better preservation of the picture separated from the wall and with separate fragments of frescoes found on the floor, gave the restorers, which will collect its parts.

This summer near Qom Pompeii, archaeologists found three electoral inscriptions. On the walls were written the names of the candidates who ran for the local Council, and appeals to vote for one or the other.