The United States has agreed with Poland to strengthen cooperation in defence, intelligence, technologies for the creation of missile defence systems and military training. With such statement the President of the United States Donald trump spoke at a press conference in the White house after talks with Polish President Andrzej Duda. 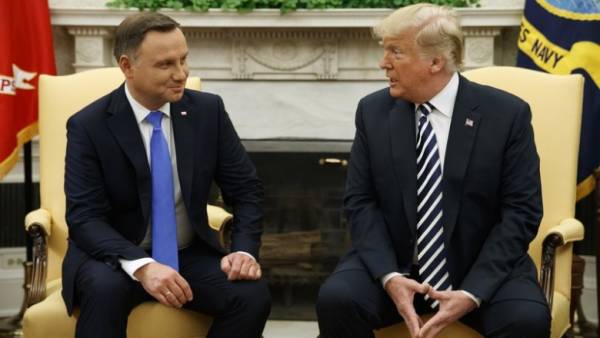 “During our talks today the President and Duda have agreed to strengthen our strong ties in the defense sphere. I am proud to announce that Poland has recently become a modern Patriot missile defense system,” said Mr. trump (quoted by TASS). He also thanked the Polish government for raising its defense spending in the framework of agreements on NATO.

According to Donald trump, the U.S. is considering the possibility of placing in Poland of a permanent American base. He stressed that the President Andrzej Duda said about the readiness of Poland to pay the United States billions of dollars for permanent military base. “The President has offered us much more than $2 billion to do so and we will consider it”, — said Mr. trump.

In turn, Andrzej Duda convinced of the need for stationing us troops in Poland in connection with the ongoing Russia’s policy in the region.

“The militarization of the Kaliningrad region — it is our reality. If to speak about Russia’s aggressive actions, the extension of military activity — is the systematic actions of Russia. The US presence is the only guarantee of security and the ability to defend themselves,” he said.