American actor mark Wahlberg told the fans about his daily routine. Sports doctors called schedule Wahlberg extreme and assumed that the actor will not be able to stick to this routine for a long time. 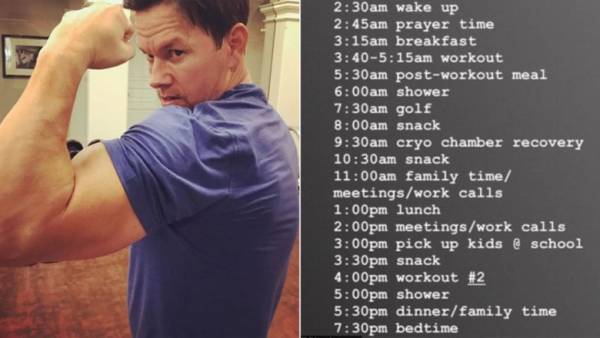 47-year-old Wahlberg, who last year became the highest-paid actor in Hollywood, published in Instagram his schedule for the day.

According to his schedule, the actor usually wakes up at 2:30 in the morning and the first half hour of the new day prays.Personalar Wahlberg

After a light Breakfast at 3:15 he begins the hour and a half workout, followed by a second Breakfast. Then a shower, a snack, a game of Golf and a session of cryotherapy.

Cryotherapy, which involves effects on the human body coldness (chilled air or liquid nitrogen), is popular among athletes as a means to eliminate the pain in muscles and joints.

Forth in the schedule of the actor is allotted a half hour to shower. Then he devotes half an hour of your time to play Golf.

The Schedule Of Mark Wahlberg