Helmets, barrels and kungas: what can be found during cleaning on a desert island

On the Yamal Peninsula for several years, the volunteers clean the Arctic of the earth. 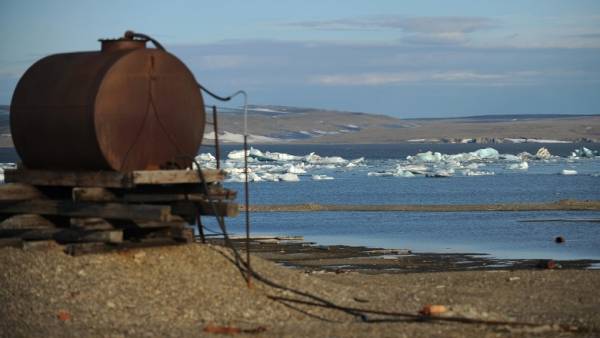 Vilkitsky island is a small curved strip of land, located in the Kara sea, somewhere between Dixon and the Novaya Zemlya archipelago. Its width is about 9 km, length — about 18 km. island is an uninhabited Island: in the words of explorers, today its population is predominantly white bears and birds. By 2017, there has accumulated nearly a thousand tons of garbage, mainly old scrap.

To take him out for the second consecutive year, the North sends volunteers who call themselves “polar brothers.” In August they completed the last shift of the season. Of the unexpected findings, psychological test for the volunteer of the Arctic and the heritage of the Arctic convoys — in the material of the portal iz.ru.

The island was discovered in the late nineteenth century and then named after the famous Russian hydrographer Andrey Vilkitsky (many people call this the land — Vilkitsky). However, accumulated debris on it, he is obliged not bears and not to the conquerors of the North the Russian Empire.

— In Soviet times it was the military part, and a meteorological station. So formed the Arctic frontiers of the Soviet Union, says the head of the volunteer movement “Volunteers of the Arctic” (part of the organization “Green Arctic”), which organizes expeditions, Eugene Rozhkovskaya.

There are, however, differences. For example, in some areas in the Arctic meet whole polygons or abandoned oil wells. In Vilkitsky nothing happened, and as a bonus — only picturesque, built in the middle of the last century lighthouse.

Then the military left the island — it was empty, the building and the lighthouse eventually collapsed, the station continued to work, but in automatic mode. Until 2017 the people here are practically did not appear.

Barrels in the inheritance

In 2017, the island went participants of the expedition, consisting of the members of the movement “Volunteers of the Arctic”. Behind the organizers had the experience of cleaning the White island, which is the same as Vilkitsky, a part of Yamalo-Nenets Autonomous district. Work there lasted four years — from 2013 to 2016.

The first expedition was to prepare the conditions for living next shift, and to assess the scope of future work. In the end, on a small island, the researchers found 29 buildings, which were to be condemned, 73 tons of steel and 30 pieces of abandoned equipment. And that’s not counting the actual waste.

Only about 1 thousand tons of scrap metal, abandoned equipment, drums, metal, buildings and structures unfit for life.The press service of the government of the Yamal-Nenets Autonomous district

This is about the same as it was on the White island, whose area is ten times more — 1900 sq km vs 170 sq km in the Vilkitsky. However, this difference in the proportions of volunteers and people interested in the history of the Arctic, is not surprising — they explain that the point here is the number of objects, located on the Islands, and it was about the same.

In addition, combustive-lubricating materials was soaked and part of the land on the island, Vilkitsky. They, as volunteers told to stay and in some of the containers that had accumulated on the island. These barrels, which in the Arctic since the beginning of its active development in the XX century got most of the cargo is one of the most common types of debris on the Northern territory.

Imagine if from 1920-ies all imported in barrels, and never thought to take. At the time, in the Soviet years, the Japanese offered to clean our island, in exchange to take away the scrap. But our proudly refused because the Arctic was considered to be a closed territory.Victor Berkibarlah, Director located in St. Petersburg Museum of Arctic and Antarctic

In Soviet times, the theme of recycling waste, most likely is not mounted with the great dream of the conquest of the Northern element. But now a movement for cleaning of the Arctic territories is beginning to envelop the same romantic flair, which inspired the pioneers of the North.

Test for the polar

About the need great Arctic harvesting in Russia started to talk to mid-2010.

In 2017, the Ministry of environment has developed a roadmap on cleaning the Arctic — it includes only 102 units on the territory of several thousand kilometers from Murmansk and Naryan-Mar to Krasnoyarsk territory.

The first work in the framework of this roadmap, the Ministry was planning to spend of 1.69 billion.

Yamal in the Federal program were not included. However, there are enough resources to make their own arrangements for such events-says Viktor Boyarsky.

— Yamal — region self-sufficient, it is possible to find resources for such cleaning. Moreover, are they (the expedition — Approx. iz.ru) small forces — the tractor almost no use, the aircraft uses minimal. It turns out overall budget. Including thanks to the volunteers who are willing to work for a smile — here the students, of course, well done, — he said.

Just to get into the team “Volunteers of the Arctic” it is impossible to pass a multistage selection system. This year, says Eugene Rozhkovskaya, after five years of organizing expeditions with colleagues they decided to make a “portrait of a volunteer of the Arctic”.