The Meteorologist said we can expect the anomalous heat in September

As told to “Rossiyskaya Gazeta” the head of the laboratory of hydrometeorological center of Russia Lyudmila Parshina, the first half of the week in the capital is expected to hot. 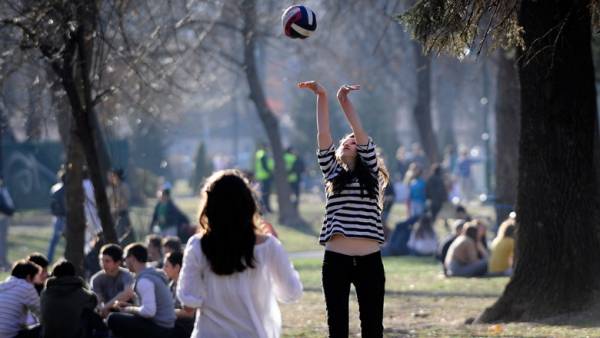 Monday afternoon to 28 heat, Tuesday and Wednesday — to 29 above zero. The night will be also quite comfortable, from 13 to 17 Celsius. This will contribute to the South wind. Monday precipitation is expected. From Tuesday until the end of the week the possible local short-term rains.

Thursday the temperature begins to go down a bit, but will still be very warm for the end of August — from 22 to 26 above zero. The same and at the beginning of September. As for the weather on Monday, 3 September, when Moscow will begin the school year, according to preliminary forecasts, will also heat in the range of 20-25 degrees.

Is above normal by 3-4 degrees, says Parshin. — Very rarely, when given such a warm August. The last time the average temperature three degrees higher than normal in 1916. The hottest August was in 1939 and 1972. Then the excess was more than 5 degrees.

According to the forecaster, in September already, we can hardly expect the 30-degree heat. It happens, but once in a hundred years. Although, perhaps it was this September and will be abnormal.

The Sunny weather will continue in some Northern areas, where last week was heavy rains with gusty winds. For example, in the Arkhangelsk, Vologda regions, the Komi Republic. In the Volga region too, mainly without precipitation, 22-27 degrees, and in the South Volga region of 20-25 degrees.

Only the North-Western regions under the influence of atmospheric fronts. In the Kaliningrad and Murmansk regions of the rain and thunderstorms. In the Leningrad, Pskov and Novgorod regions intermittent rain. But the heat -20−25 degrees.

In the South to 30 degrees and above. In Krasnodar Krai, Adygea Republic to 34 degrees. But the strong wind will create a feeling of coolness.

In the Urals is still cool: 10-15 degrees. A little rain. In the Perm region — 18-23 degrees. Heavy showers will move in Kurgan oblast. In the South of Western Siberia — in the South of the Tyumen region and in the Omsk region — cool 16-21 degrees. And that’s below normal. In Novosibirsk, Tomsk regions, the Altai region of 16-22 degrees. Only in the foothills of the Altai and the Kemerovo region to 28 degrees. In the North of Western Siberia 15-20 degrees during the day. In the Central and southern districts of the Krasnoyarsk region to 28 degrees, heavy rains on Monday.