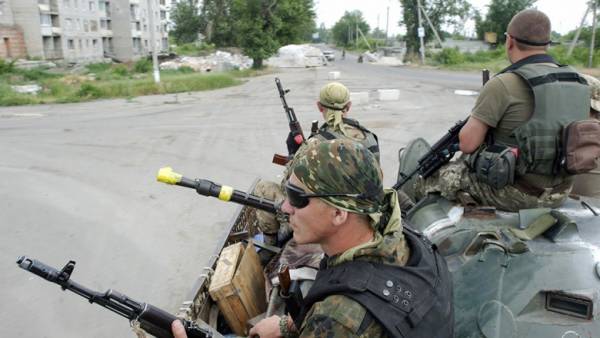 “As a result of the fighting killed five of the defenders of Ukraine, even seven soldiers of combined forces was wounded”, — stated in the summary published at the headquarters of operation joint task force Facebook.

As reported, the Ukrainian military on Thursday from 07:00 to 18:00 the enemy 12 times violated the ceasefire, four of the shelling was conducted with artillery and mortars. As a result of retaliatory fire was destroyed by the 12 participants of the illegal armed groups, 17 were injured, according to the summary.

Earlier, President Petro Poroshenko said that Ukrainian forces repelled a five-hour morning attack near the village of Zholobok in Luhansk region, which killed four soldiers of the armed forces of Ukraine.

So, according to Poroshenko, on Thursday at 6 a.m. the enemy “forces more reinforced company into the offensive zone more than 1 km, with a powerful artillery preparation, with the use of heavy artillery, mortar, carried out attacks on positions of the APU in the area of the Groove”. According to him, as a result of attacks four Ukrainian soldiers were killed and seven were wounded, “but regrouped in a timely manner, opening fire in response, using reserves, the attack was repulsed.” According to Poroshenko, the enemy losses were 8 killed and 11 wounded. APU is “fully restored the line of collision”.

For its part, the defense Ministry of the self-proclaimed Luhansk people’s Republic said earlier about the attempt to break the APU militia positions near the village of Zholobok. According Lugansk, in battle three Ukrainian servicemen were lost and four were wounded.