LONDON, Aug 23 — RIA Novosti, Natalia Kopylova. British Minister for Brexit Dominic Raab on Wednesday will present a plan of action of the authorities and recommendations for citizens just in case London and Brussels fail to reach agreement on the terms Brexit, announced the British government. 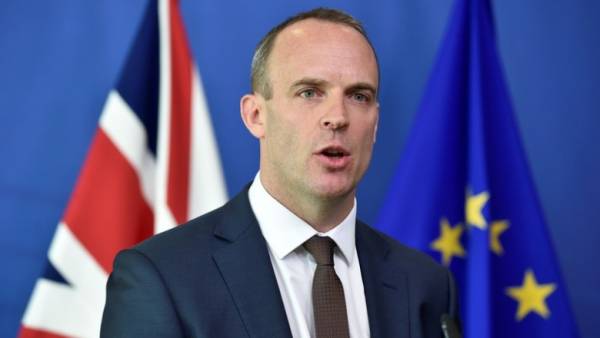 It is expected that the Minister will give a speech to introduce the first part of technical advice to business and citizens in case a deal is not reached.

The report notes that, although the government is confident that the agreement most likely, the authorities must be ready for any outcome of the negotiations, including the option of “no deal” under which the parties will not be able to 29 March 2019 to negotiate the terms “divorce”.

We must be willing to consider an alternative. We as a responsible government, are obliged to plan each case.Dominic Fabbricanti the Minister for Brexit

The first part of the recommendations prepared for business and citizens, will have an action plan in which the UK will ensure smooth operation of the business, transportation, infrastructure, assistance programs and financing.

In addition, Britain in the case of “no deal” is obliged to behave according to the attitude of the EU as a “responsible European neighbours, partners and allies,” the report says.

Britain and the EU until the end of October should address three important questions that would allow Brexit in compliance with the interests of the parties to complete negotiation of the Treaty on withdrawal from the European Union, to solve the problem of the border with the Republic of Ireland and to develop the format of future relations. The UK will leave the EU on 29 March 2019.