Moscow. 21 Aug. INTERFAX.RU — Exchange of Oleg Sentsov on the Russian prisoners in Ukraine is impossible, since he is a citizen of both Russia and Ukraine, said the Commissioner for human rights in the Russian Federation Tatiana Moskalkova. 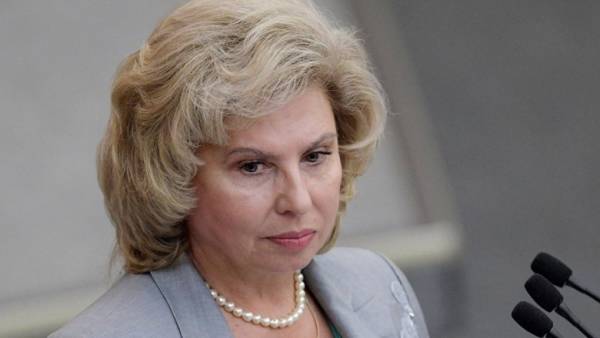 “As for Sentsov, (Dmitry) Sterlikova and so on, they did in fact dual citizenship. And according to the Ukrainian Constitution, their citizens cannot be extradited to the territory of Russia — as well as us citizens shall not be extradited to another area,” — said Moskalkova at a press conference on Tuesday.

“Therefore, we need to look for some new legal form”, she added. According to the Commissioner, between Russia and Ukraine should be concluded a bilateral agreement on the status of persons with two nationalities.

“We can’t ignore the fact that today a large number of people simultaneously have passports,” — said Moskalkova. Therefore, the agreement should stipulate that these people are recognized as citizens both of the state and they should be allowed consuls and commissioners for human rights, she added.

The Ombudsman expressed the hope that the negotiations of the two countries ‘ foreign Ministries and other competent authorities, a solution will be found.