Austrian researchers found that domestic pigs are able to recognize a human face and head. It showed an experiment in which two groups of pigs had to choose the correct orientation of the head on the photos to produce food. 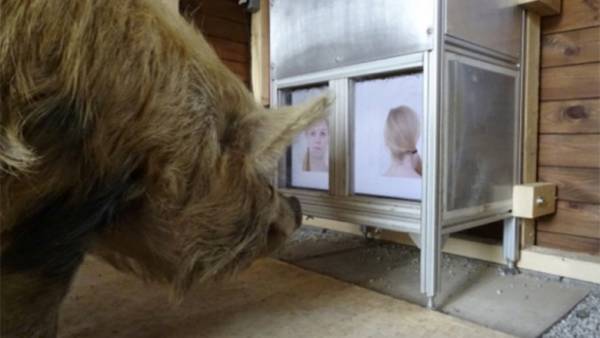 Interestingly, for the recognition of animals use not unlike the back of the head and the image of the person as a whole with all its features. Write about the scientists in Applied Animal Behaviour Science.

Cognitive abilities and behaviour of domestic pigs (Sus scrofa domesticus) are studied quite often. Canadian scientists, for example, was able to prove that they have episodic memory, but two years ago, British scientists have shown that pigs can be optimists and pessimists. The difference between these animals and the ability to recognize objects and navigate the terrain, but the ability to do this is by scent they have developed better visual.

Men and women see the world differently, scientists have found

Despite the fact that some studies indicate the ability of pigs to recognize its owner by voice and face, just about their ability to visual recognition are little known. Scientists from the University of Vienna under the leadership of Maryanne Vondrak (Marianne Wondrak) decided to see if pigs are to distinguish the man’s face from his neck and whether they use individual guides attention to features.

In their experiment participated 33 pigs who lived with people for at least two years. For several weeks they were introduced to the experimental setup, with which it was possible to treat (Apple slice) by clicking snout on the glass panel. Training continued until, until the animal will start to press on the panel and to treat at least 12 times out of 15. Then the pigs were divided into two groups: one trained to obtain treats when a photo of a person and the second receiving treats when you select the back of the head. When training was used photos ten women and is then used for verification.