Putin arrived in Berlin for talks with Merkel

BERLIN, 18 Aug — RIA Novosti. Russian President Vladimir Putin arrived in Berlin for talks with German Chancellor Angela Merkel to discuss the situation in Syria, Ukraine, US sanctions and the implementation of large international commercial projects, including the “Nord stream-2”. 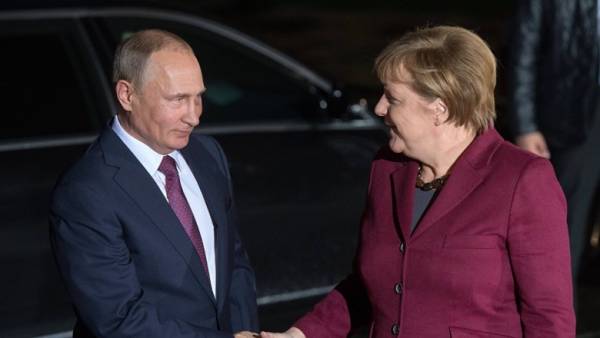 The Russian leader arrived to the airport of Berlin from Austria. There he attended the wedding of the head of the Austrian Ministry of foreign Affairs Karin Kneissl. According to the press Secretary of the President Dmitry Peskov, the trip to Austria was of a private nature. Kneisl Putin invited to the wedding even during the visit of the Russian leader to Vienna on 5 June.

According to the official representative of the German government of the Steffen Seibert, the German-Russian negotiations will be held at the castle Meseberg, situated 70 kilometres North of Berlin. The meeting will take place three months after the talks between Putin and Merkel may 18 in Sochi.

Before the talks Putin and Merkel will make a statement to the press. Peskov explained this unusual format to the beginning of negotiations in the second half of the day: “still, it’s a Saturday, too late to make statements from the information point of view is not very convenient”.

Previously Peskov said that the leaders will hold meetings to compare notes on all the important issues: “is Ukraine and Syria, this restriction, which anyway face in many countries, and the effect of those restrictions”.

Merkel herself on the eve of the meeting said that a number of common problems, from Ukraine and Syria to the economic cooperation, makes a permanent dialogue with Russia is justified. She stressed that Berlin wanted good relations with Moscow, the meeting will be of a working nature and “she don’t need to wait for special results.”

After the announcement of Putin’s visit to Germany, German business welcomed the meeting between the leaders of Russia and Germany, hoping to continue the dialogue in order to resolve issues and implement new projects.