The Egyptians learned to embalm the dead before the appearance of the pharaohs. Now it is proved

The ancient Egyptians developed the technology of embalming of dead bodies and a half thousand years earlier than previously thought, according to a press release from York University, as well as in the article, which will be published in the Journal of Archaeological Science. 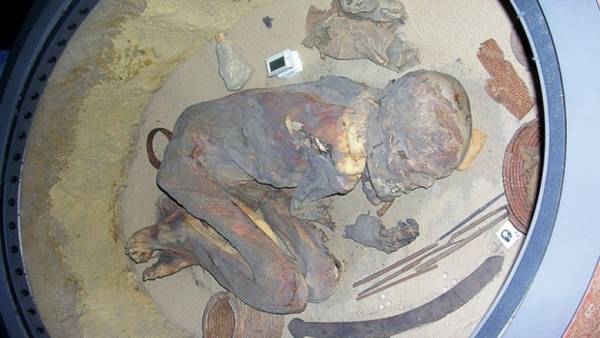 Researchers have studied the mummy of a man who lived in middle Egypt about 5.6 thousands of years ago and found that embalming were used about the same composition as one and a half millennia later, when the artificial mummification was widely used.

“The Turin mummy” or “Fred” as it is informally called, is kept in the Egyptian Museum of Turin since the beginning of the XX century. It dated to the early phase of culture Nevada, which lasted about 500 years, from 6 to 5.5 thousand years ago, in pediatricheskii period. Unlike most mummies, which are kept in museums, “the mummy Turin” has not been preserved. This makes it very valuable for scientists who can examine the body in the form in which it was brought to the Museum.

Previously, researchers believed that the mummies pediatricheskogo period and the Early kingdoms that were older than approximately 4.5−4 thousand years, preserved by natural mummification in the hot and dry climate of the body just dried up. It was assumed that the embalming and use resin to preserve the body, the Egyptians started late, about 4.5 thousand years ago, during the old Kingdom. More reliable evidence of the use of resin for mummification preserved from the Middle Kingdom, which existed for about 4-3,6 thousand years ago .

In 2014, British and Australian scientists led by Dr Stephen Buckley (Stephen Buckley) from York University, examined samples of funerary wrappings from grave sites in Mottahedeh and El-Badari, which were made 6300-5100 years ago, and found in them traces of wood tar, apparently of coniferous trees.

In the new work, the researchers studied samples of the shroud, taken directly to “the Turin mummies”. The authors conducted a microscopic analysis of the samples and chemical and elemental analysis of substances on them. In addition, genetic and radiocarbon analysis were subjected to and the mummy.

Scientists said, who owns found in the black sarcophagus of a mummy

As a result, scientists found that the mummy belonged to a young man 20-30 years, and mummification of the body was carried about 5.6−5.5 thousand years ago. The authors were able to determine the approximate recipe, which was used for embalming, it was like a mixture, which was used fifteen hundred years later, during the Middle Kingdom (4-3,6 thousand years ago). The structure includes a base of vegetable oil or animal fat, a smaller amount of resin of coniferous trees which has antibacterial properties, an aromatic plant extract and a small amount of wax and carbohydrates of plant origin.

“There are very few mummies “natural” type, available for research,” says Professor Tom Higham (Tom Higham) from Oxford University. “Radiocarbon Dating revealed that it dated to the early phase of culture Negada pediatricheskogo period. It existed much before the classical era of the ancient pharaohs and the mummy gives us an unprecedented opportunity to study the funerary practices that existed prior to the formation of the state”.