What you need to know about the Russian-Austrian relations

Moscow and Vienna will always remain a reliable partner in spite of any difficulties. What is the secret? 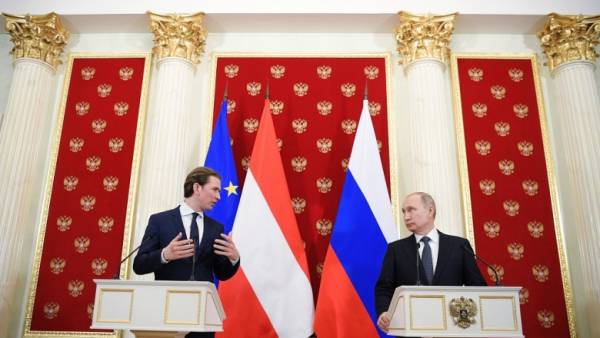 “From Vienna to Moscow has always had a well-established communication channel, the communication was open, the dialogue successful,” — said in an interview with TASS, the Chancellor of Austria Sebastian Kurz. Assessment of the Russian foreign Ministry, in cooperation with Austria are characterized by “stability, predictability and lack of significant problems.” What is the key to such positive relations between the two countries?

Compared with other member countries of the EU the relations between Russia and Austria are really high.

“Austria pursued a policy of maintaining dialogue with Moscow, preserving the accumulated positive interaction in various fields, the use of political and diplomatic tools for normalizing the situation around Ukraine”, — said on the website of the Russian foreign Ministry.

According to the Embassy of Austria in Russia over the last ten years, Russian and Austrian politicians and Ministers have carried out dozens of official visits to Vienna and Moscow, respectively.

So, on 28 February, the Chancellor of Austria Sebastian Kurz held talks with Russian President Vladimir Putin in Moscow, and April 20 in the Russian capital have been talks between the foreign Ministers of the two countries Sergey Lavrov and Karin Kneissl. In late may, Deputy Minister of foreign Affairs of Russia Igor Morgulov received the Ambassador of Austria in Moscow Johannes Aigner. The 5th of June was held the official visit of Vladimir Putin to Vienna, the first foreign trip of the Russian President after the may inauguration.

During the visit, the Russian head of state discussed with the Chancellor of Austria not only the strengthening of bilateral political and economic relations, but also the state of Russia’s relations with the EU.

The role of a mediator

When a number of European countries agreed to the expulsion of Russian diplomats for “business Skrypalia”, Austria joined in. “It would be possible to make another decision, there are different arguments, but I think we made the right decision,” said Sebastian Kurz on a talk show on the TV channel Puls 4, adding that Austria is a neutral country, in the capital containing the headquarters of many international organizations (e.g. UN, OSCE and IAEA).

Every day, hundreds of diplomats are in talks in Vienna, on neutral territory, and we develop our role in building bridges.Sebastian Korrastamise Chancellor

At the same time, the Austrian foreign Minister said in Vienna, “open to all, and if we are asked about mediation [between Russia and the UK], then we are ready for it.” Kneisl added that the mediator “never imposes its services, intermediary services are used by”.

The economic component of relations between the two countries is on the rise. As stated by the President of Russia Vladimir Putin at a meeting with the Chancellor Kurtz February 28, 2017, the observed “increase of turnover to more than 40% of Russian investments in the Austrian economy reached $23 billion, [Austrian] in the Russian economy — $5 billion.”