Putin at the forum “Mashuk” told the story of Nicholas I

PYATIGORSK, August 15 — RIA Novosti. Russian President Vladimir Putin at the educational forum “Mashuk” told the story about the resourcefulness of the Russian Emperor Nicholas I. 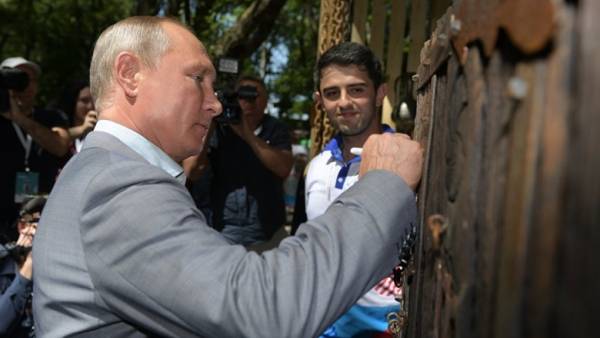 One of the tents, who visited the camp President, was called “About heroes”. Putin presented the project of the film about the heroes and history of Russia. One of them is dedicated to the son of Imam Shamil, Jamaluddin, which was in the Second page corps and grew up at the court of Nicholas I. Later in that era that served as a powerful impetus for the unification of Russia and North Caucasus.

The President spoke positively about the projects, while noting that Nicholas I himself was “an extraordinary personality”. In this regard, he told the story about the Emperor, recently heard by them. Nicholas I often drove the route past the one place where division soldiers were engaged in the chores. “He said hi: “it’s Great, well done!”. They answered him: “good morning, Your Imperial Majesty!”, — said Putin.

There was also another unit: the soldiers that were guilty and practiced punishment in the guardhouse, to shake hands with them was not supposed to, the President continued.

“But Nicholas a few days went (past), then all the same stopped, turned to them, “Hey, guys!” Thus, it gave them the chance to say Hello (the king — ed.)”, — Putin said with a smile.

In the framework of the exhibition in the tent the presentation of projects related to the Heroes of Russia: the exhibition “About Heroes”, the project “Heroes of our time,” “Heroes among us”, the photo exhibition “the Little hero of Russia” and others. Alan Tskhovrebov, the curator of the recent project undertaken by the Young guard of United Russia, Putin introduced the two children who, at great personal risk, saved the other in case of emergency: the girl brought people from a burning building, the boy rushed to help a friend who was drowning in a mountain of Terek.