“Moses has left us a great mystery”. Archaeologists are rediscovering the Bible

MOSCOW, 12 Aug — RIA Novosti, Anton Skripunov. In recent years, increasingly report sensational discoveries of archaeologists confirming the reality of the described events in the Bible. A lot of these “biblical finds” made in Jordan. 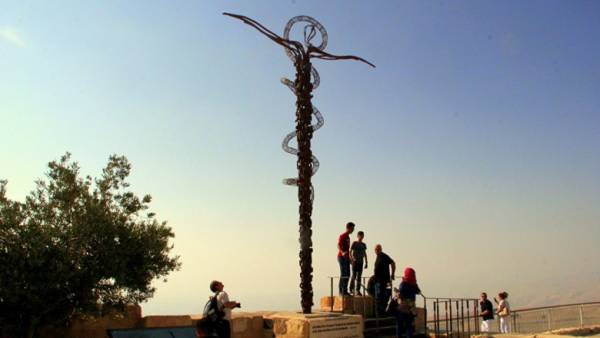 About how scientists determine the authenticity of the shrines and what mysteries they have yet to solve — in the material RIA Novosti.

Archaeologist Rustom, Mjan shows the correspondent of RIA Novosti ruins of a Byzantine Church near the Jordan. Some twenty years ago about the features of the town of al-Maghtas on the East Bank of the river (in Jordan) know is that the local Bedouins.

In 1996 we began to explore the area. Our team of 70 archaeologists systematically studied every piece of land, making trial excavations. If anywhere something is found, I dug wider and deeper. Rustom, Mjan

And so until then, until he came upon traces of masonry. Started to clear I saw the wall, and going back down. Several years of excavations — and here before us the Church is an unusual shape: the entrance is located on a hill, from there down to the center of the structures had stairs. It turned out to be big font cruciform shape, at the bottom of the mosaic. And judging by the inscriptions on the remaining fragments, a Church built in the fifth century. And to her here, presumably, was the chapel.

“We realized that we reached the goal, — found the exact place of the baptism of Jesus Christ.” — exclaims a Jordanian archaeologist.

But why is he so sure? Before the excavations, experts have done a great job with the archives, having carefully studied all the available evidence concerning this so significant for Christianity events.

First, the researchers relied on the gospel account of the baptism of Jesus Christ. There is passing reference to a place called Beth-Abara (Vihara — in the Russian version of the Bible), or “crossing of the prophets.” And secondly, analyzed the descriptions left by medieval pilgrims.

The biblical archaeologists have a rule: if somewhere in the Holy land discovered the Church of the Byzantine period, so he built an ulterior motive here.

For example, with the excavations near the village Listin in the North of Jordan. In 1999, during held here military exercises near the settlement accidentally found fragments of mosaic. Then archaeologists unearthed the temple complex of the sixth century. And thanks to the preserved mosaic inscriptions and the descriptions of the pilgrims, the researchers found that in pre-Christian times there was a village Fish, which is mentioned in the Third book of kings, included in the Bible.

“The Tishbite, of the inhabitants of Gilead” is the prophet Elijah. Apparently, the Byzantines learned of this and decided to immortalize this place.

Now the hill of St. Elijah, tel Mar Elias. “In the area, the archaeologists found more than 60 Byzantine churches. There was a huge Christian community,” says Rustom, Mjan.

the Test of faith: myths about the baptism of Rus

However, the abundance of churches in close proximity to biblical sites not necessary to be surprised. Much more unexpected was to discover in the South of Jordan, the Christian Church is the oldest in the world.

The city of Aqaba on the red sea was called Aila. During the Roman Empire it was one of the largest “hubs”: through it to Europe along the silk path.