A set of measures to curb Donald trump

At the disposal of “Kommersant” was a bill on sanctions against Russia. 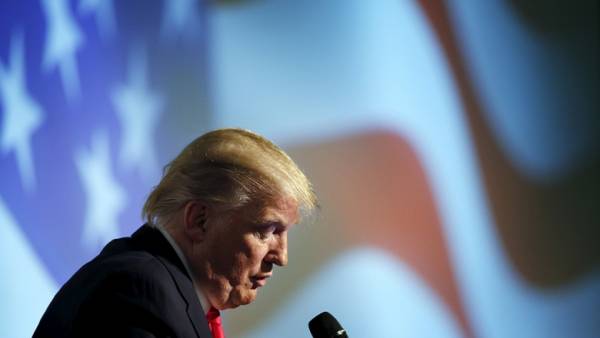 At the disposal of “Kommersant” was the bill on new sanctions against Russia, prepared by Republican Lindsey Graham and three of his colleagues. A significant part of the provisions of the document is not so much Russia, but U.S. President Donald trump. He is required to bring into a system already entered earlier sanctions against Russia — from CAATSA to the “Magnitsky act”, to create in the US government “sanctions coordination office” for the agreements with the EU to support sanctions block dollar payments of Russian banks, prohibit the operation to US residents with a new Russian public debt, to create a national center to combat Russian threat, to search the world for the assets of Vladimir Putin and even to solve the issue of the recognition of Russia as “state sponsor of terrorism.” The document contains a mechanism designed to prevent Donald Trump to withdraw the U.S. from NATO. Basically, it looks like the American political project in which Russia for its authors more or less secondary in comparison with the US President who is too soft toward Russia.

“An act to protect American security from the aggression of the Kremlin in 2018” was introduced in the Senate last Wednesday. On the Congress website says that after this step the full text of the document will usually appear “within one to two days.” However, it is also noted: some delay may occur if simultaneous processing of a large number of bills or, if necessary, print “very big law.” As of yesterday evening document from more than one hundred pages at the disposal of “Kommersant”, was never published.

Prepared by senators Lindsey Graham, Robert Menendez, Cory Gardner and Ben by Cardinal text starts in two appeals to President Donald Trump. In particular, it urged to support efforts to counter-intervention “from the government of Russia or other foreign players in the activities of the U.S. government and in democratic processes in the country.” The second wish is “to publicly call on the government of Russia to return Crimea under the control of the government of Ukraine, and also to call to abandon support for violence in Eastern Ukraine from separatists”. In this paragraph it is also about “the occupation and support for separatists” in the territories of Georgia and Moldova. Another requirement (again to President Trump) — to encourage Moscow to abandon support for Syrian President Bashar al-Assad, who, according to the authors of the draft law continues to “commit war crimes”.

In General the structure of this document is justified by its common sense, the bill requires the unification of all entered in separate acts of anti-Russian sanctions, “the Ukrainian” to “cyberterrorists” in a single mechanism.

To coordinate this process, the US government proposes to introduce “sanctions coordination office”. Recall now the “political” part of the sanctions implemented by the us Department of state, financial and office OFAC of the U.S. Treasury. “The sanctions office” is the coordination of sanctions with the European Union, including, apparently, financial. In addition, it is proposed to create another institution, “the United national center for response to hybrid threats”, which will the system struggle with the attempts of the insidious influence of the Russian Federation in the world and in USA. Finally, with the 2020 financial year it is proposed to provide access to the budget Fund in the amount of U.S. $250 million for States vulnerable to Russian influence.

The text of the document follows, that the senators representing the Republican and Democratic parties, think of President trump an unpredictable politician. The first Chapter of the document concerns the relations of States with NATO — an Alliance that Donald trump has repeatedly criticized. In the case of the bill banned will be the funding of measures — directly or indirectly — in support of attempts to “any representative of the government of the United States” to lead the country out of NATO. Such a decision is theoretically not excluded, but will be possible only if he will vote two-thirds members of the Senate. The authors of the bill were not only for the preservation of NATO membership, but also for strengthening the Alliance. The document mentioned that every 90 days the Secretary of state after consultation with the Secretary of defense shall submit to the relevant congressional committees a report on “the threats facing NATO.” In this report, in particular, needs to be specified “adjustments of the US commitment to NATO in order to respond to new threats and challenges from the government of the Russian Federation”. Also mentioned the possibility of gratuitous transfer to the United States other NATO unnecessary items weapons — the Pentagon needs, in consultation with the Secretary of state to consider the need and the opportunity within 60 days after the entry of this law into force.

In the economic part of the project the most important requirement of a prohibition on operations in the United States (and the freezing of assets) of the seven Russian banking structures that are already in the sanctions regime, including Sberbank, VTB, VEB and PSB. In practice, this will mean the inability of these banks standard dollar settlements through correspondent accounts in U.S. banks — let’s remind, that this is of concern to the business community in Russia. In addition, the text contains the actual ban on operations with Russian debt with a maturity of more than two weeks — but only with new releases (new debt), which significantly softens the impact of such decisions. In addition, the project proposes to extend monitoring violations of sanctions on the activities of insurance companies.

In the “personal” part of the sanctions project the main idea was to get Donald trump to more effectively perform the act CAATSA. In this plan, the senators propose to reduce the time the report on execution of sanctions, within 60 days after the adoption of the bill update “the Kremlin list”, and also to start practical work on the search of assets and personal wealth in the world, Vladimir Putin.

A lot of attention in the text is given to cybersecurity — a key topic that remains at the centre of attention in the United States for all time of presidency of Donald trump. The bill endorses the establishment of state Department office on issues of cyberspace and the digital economy leader, with the rank of Ambassador. In addition, the fourth Chapter of the bill deals with the prevention of cybercrime. The authors propose to introduce sanctions against Russians involved in the “malicious activity in cyberspace”, to take the act on preventing international cyber crime and make the criminal laws of the United States amendment, which would allow a Federal prosecution and conviction of persons involved in attacks on critical infrastructure and systems related to elections.

The elections continued in the next Chapter, which repeats verbatim the text of the bill proposed by Senator Dick Turbina in April of this year. The text was listened to twice and hung on the consideration of the Senate judiciary Committee — now it is proposed to consider again, in the package. We are talking about the amendment to the immigration law and nationality, in which it is proposed to amend the definition of “undue interference in U.S. elections”. The senators propose to understand this “behavior of the foreign citizen”, which constitutes interference in elections of any level on the order of a foreign government. Those who you think are involved in this intervention will not issue a visa to the United States.

Another Chapter, the third concerns the non-proliferation of chemical weapons. It proposes “to exert pressure on Russian authorities” to stop attempts to prevent the UN and the Organization for the prohibition of chemical weapons to investigate cases of its application. Also, the bill contains an initiative “to punish the Russian government for the manufacture and use of chemical weapons” and to deter Russia from its distribution. The need for such measures is justified by the fact that in March of this year, as stated in the bill, “the Russian authorities knowingly used a toxic substance “Newbie” trying to kill ex-GRU officer Sergei Skripal,” and “did not want or are unable to persuade President Bashar al-Assad’s ally, Russia, to stop the use of chemical weapons against civilians in Syria”.

The bill is quite meticulously enumerates the different kinds of secondary issues that are associated with Russia. So, the individual projects program limits the ability of Russia to use the “red warrant” of the Interpol to prosecute their political opponents, the extension of the moratorium on U.S. imports of uranium from Russia from 2020 to 2030.

. On the one hand, this formulation looks like a provisional application for campaign at the United Nations to exclude Russia from among the permanent members of the Security Council, on the other hand, are much more pragmatic: under that flag, since 1983, has imposed strengthened sanctions against Iran. Despite the fact that the mere fact of submission to Congress of such a document is only event in the inter-politics, while the project of new sanctions does not look extremely hard, for example, Russian oil exports, he is not trying to block. Perhaps the authors of the draft save that idea for the next round.

Separately is the opinion of Congress that providers of social networks must “share responsibility” with the U.S. government for preventing them in Russian and all foreign government agitation and propaganda, — this provision of the bill ends.