The mountain gardener: Melania trump with shears made fun of in social networks

MOSCOW, 2 Jun — RIA Novosti. The Network has made fun of bad photos wife of the American President of Melanie trump, on which the author of the picture “caught” it for gardening. 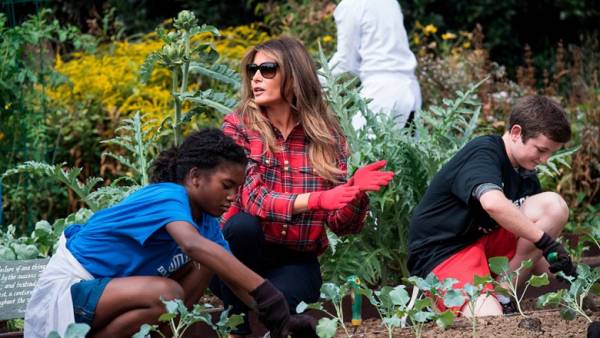 On the frame of the first lady working in the Kitchen Garden at the White House, closer to the basket and holding the shears. At first glance, the photograph looks spontaneous, but netizens caught the Melanie that she has no idea about caring for a garden and, most likely, clumsily trying to create the appearance of work on camera.

In particular, commentators criticized the choice of clothes for such classes, as the wife of the President even in this situation, did not refuse from expensive branded items. They also pointed to the fact that her suit can’t be comfortable and long hair ought to be bundled at least for reasons of security.

1) poor choice of clothing for garden
2) Even if I was rich, I would never wear a $600 blouse to garden (good way to spoil the garment)
3) Gloves do not look like proper gardening ones
4) long hair untied – saftey hazard. #Melania #melaniatrump #balmain pic.twitter.com/rYSq2bm9wO

Not satisfied users of social networks and the strange posture of Melanie, which, in their opinion, speaks of the unsuitability of the first lady to work. Some have suggested that the picture she threatens someone with a gardening tool.

M: lol got it. pic.twitter.com/799qrTnMLn

why does melania look like she broke into someone’s garden and was caught in the act pic.twitter.com/XX6YmeNljB

“Why Melanie looks like you snuck into someone’s garden and caught her?”