“It is strange, but journalists seemed to understand what they were saying killer”

Media CAR give you the details of the investigation into the deaths of the crew from Russia. 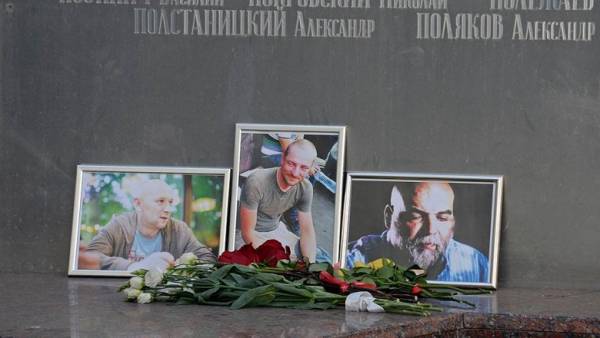 In the Central African Republic (CAR) continues the investigation of the death of the crew from Russia on Thursday, the investigation team of the gendarmerie visited the murder scene and interviewed local residents. The details of the attack reported local media. So, according to local online publication Corbeau News, the members of the crew of Russia understand that they say the killer during the attack.

“The group gendarmerie of the CARS went to the scene and conducts investigations to establish the circumstances of the killing of three Russian journalists near the city of sibut. Investigators conducted a detailed examination of the crime scene, interviewed the residents of nearby villages for obtaining the necessary information”, — reports TASS words of the chargé d’affaires of the Russian Federation in the Central African Republic Victor Tokmakova. According to the diplomat, “from the place where journalists have been murdered, disappeared their crew, equipment, and among the remaining things that previously, the government moved to capital city Bangui, was clothes, hard disks and flash drives”.

We will remind, the death of the TSAR the Russian crew became known on Tuesday, when the media reported the killing of three unknown men with press-cards to the Russian media. The dead were a journalist Orkhan Jemal, Director-documentarian Alexandr Rastorguev and operator Kirill Radchenko.

As noted on Thursday in Embassy of the Russian Federation, any substantially new information on the case yet. However, local media gradually give details about the crime — apparently, getting information from investigators. So, the online edition Corbeau News, citing “multiple sources” reported that the journalists were planning to visit the city of Kaga Bandoro. There is a UN mission in the Central African Republic, a substantial part of the territory in the area controlled by the representatives of the Muslim rebel movement Seleka. According Corbeau News, reporters contacted “some leaders of the rebels.”

“When they arrived in the town of sibut on Monday, then met with soldiers of the national army of the Central African Republic FACA 5 km from the city. Knowing the terrain, the soldiers advised them not to travel at night, but reporters got on the phone with someone from their countrymen and then said that the real danger on the way there, and they can go. Yielding to their insistence, the soldiers allow them to leave between 23:27 and midnight”, — writes the edition.

Then the car at which wheel there was a local driver, was stopped by a group of armed men in 18 km from the checkpoint FACA. Journalists were killed and their driver was wounded, but escaped. Thus Corbeau News and the Ministry of information the Central African Republic noted that the attackers were wearing hats — but if the Minister uses the word “enturbanees”, which in Russian language can be translated as “the turbans”, Corbeau News uses the word “cagoules” — Balaklava, under which “hidden face” killers.

With reference to questioning the surviving driver, the publication writes: the attackers spoke not in French and not in Sango (the national language of CAR).News

Coups, diamonds and poverty: what is happening in the Central African Republic

“Strange, but three journalists, it seemed, was well aware that told them of the murderer”, — the publication reports, noting that the murder was planned and probably executed not by the representatives of the local armed groups. “God knows how did you all actually” — philosophically ends with the note.

As told “Kommersant” one of the Western journalists currently in Bangui, the roads in CARS really dangerous to move. “Officially, the government controls only 20% of the territory, but even if this direction often meet FACA and patrols of the UN mission, still all over the many of bandits and checkpoints by armed groups of every kind,” he says. “Very careless to leave the city by night, as did our colleagues, — said the journalist.— While it is impossible to exclude any of the hypotheses”.