The most terrible war of the present is still ongoing. Everything about her was forgotten. 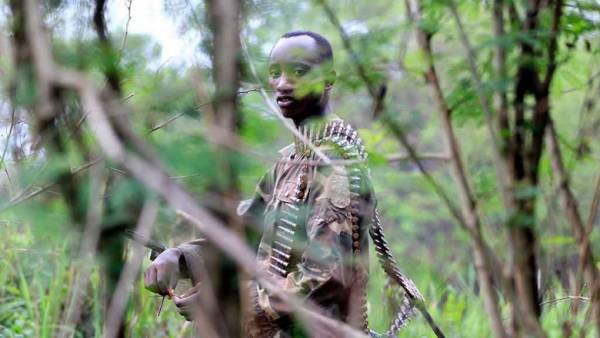 The great African war — the so-called almost unknown in the global environment of military conflict. Meanwhile, he became the most bloody since the Second world war. In the Democratic Republic of the Congo, the area comparable to the territory of Western Europe, merged ethnic strife, lust for power and the desire to capture natural resources.

In this war that began on 2 August 1998, were involved nine countries and more than 20 groups fighting on 50 fronts.

Surprisingly, the objective reasons to start a massacre that claimed the lives of 5 million people, was not. Most of the dead were victims of starvation and epidemics caused by unsanitary conditions everywhere prevailing in the country, covered with impenetrable forests, where there are practically no paved roads and telephones. The civilized world has hardly noticed it happening, because this region is strategically important. “Ribbon.ru” recalls the enormous tragedy of our time.

Coups, diamonds, poverty. What happens in the CAR, which killed Russian journalists

“By chocolate waters of the Congo river, float the mutilated corpses. One of the militants, considered a Minister for children, trembling with fear. With in minutes from the capital of Kinshasa come to the special representatives of the UN. How to conceal from them that his group of rebels brutally killed and gutted 150 people in the town of Kisangani, and then filled their bellies with stones and dumped in the river? Instead of saying the truth, he smiles, bowing to the messengers, and willingly takes from them food and other necessary things”, — as The Economist describes one of the episodes of the war that broke out in the Congo 20 years ago, and unofficially known as the African First world war.

One of the features of this war was inhuman cruelty. Half a million women were victims of sexual violence, often, the militants attacked five-year-old girls who stabbed pregnant. The confessions of militants, many of them were killed a day for a hundred people.

They wanted to show the locals how much it will cost them resistance. They just were not afraid of revenge. These murderers dismembered the priests, brutally raped nuns, pulled out the unborn babies from the womb of their mothers, shredding the bodies, folding them origami.WitnessLong before the tragedy

In 1960, the Congolese received independence from Belgium and found the area with the largest deposits of diamonds, gold, tungsten, cobalt, copper, uranium and coltan. The beginning of the war in Zaire (the so-called Democratic Republic of the Congo from 1971 to 1997) for 30 years of rule by dictator Sese Seko Mobutu. When it is the second largest African country, people lived quite peacefully, but poorly. All the tools that gave Western countries, fell into the bottomless pockets of the President and his entourage.

The quiet life ended in the early 90s, when neighboring Rwanda began a severe civil war between Hutus and Tutsis, rapidly developed into the genocide, which had killed about a million Tutsis.

Those who managed to avoid death, poured into Zaire. With them to the neighbors under the guise of refugees moved and the representatives of the Hutu involved in the genocide. Fighting each other, they continued in Zaire. It was at the hands of opponents of President Mobutu. The main oppositionist of the country, Laurent-désiré Kabila, who was called comrade-in-arms of Che Guevara and veteran guerrilla leader, led a revolt.

The neighbors in the African continent had to choose which side to align with in this conflict. Kabila and his “Alliance of democratic forces for the liberation of the Congo” was supported by Uganda, Rwanda, Angola and Burundi. Under their pressure, the Mobutu regime fell, he fled to Morocco, where he soon died. After 32 years in power, he left the country with a ruined economy, debt in the amount of $ 14.5 billion, a corrupt political system and inflation of 9800 per cent.

It would seem that with the change of government in the country the war was supposed to end, but everything went according to different scenario.In the hell of war

The new leader first renamed the country the Democratic Republic of the Congo and quarreled with allies. He began to deport Tutsi squeeze of representatives of the peoples congressthe origin from the army and other security agencies for fear that the Tutsis decided to settle in the Congo and to turn the war weakened the state in your country.

Called the most dangerous country for women

Unpopular measures were a blow to the credibility of Kabila provoked the uprising in the city of Goma, where he moved more than a million members of the Tutsi. Their commander, General Jean-Pierre Ondekane gave the order to advance on the capital, Kinshasa. Kabila has decided to bet on the sworn enemies of the Tutsi — Hutu. Boil civil war with its ethnic cleansing.

African neighbors once again chose which side of the conflict to borrow. Angola, Zimbabwe, Namibia, Chad and Sudan supported Kabila and his government; Burundi, Rwanda, Uganda and representatives of the Angolan opposition party UNITA began to fight side by side with the rebels.

Each of the parties pursued their goals. Sudan was looking for an excuse to war with Uganda by proxy, Angola wanted to get involved in the conflict to pacify and break of its own UNITA rebels, who used the territory of the Congo for supplying arms and ammunition, and Namibia went for it because of the allied commitments to Angola. And Zimbabwe had their reasons: who was then President Robert Mugabe was jealous of the power of South Africa and wanted to make his country a strong regional power.

By the way, in addition to nine African countries in the conflict was involved, and other States. So, North Korea sent to help Kabila 400 experts for the training of military and thousands of weapons in exchange for future supplies of copper, cobalt and uranium.

Many Western diplomats and experts believe that the United States secretly helped Rwanda and Uganda, writes The Economist. Officially, the state Department denies this, but it is difficult to imagine how these poor countries could fight for so long without getting outside help. Given that the entire defence budget of Uganda is $ 100 million, it is unlikely that the country could draw a military operation in the Congo.

On the way to completion

First, the rebels have developed a successful offensive on the capital, winning victory after victory. However, to achieve decisive success they failed with the government came powerful reinforcements from Angola. With the help of her soldiers, the rebels managed to oust from the major cities of Matadi and Keaton. However, they remained a powerful force in Angolan territory, where they pulled the part of the government troops. This allowed them to capture a large area in Eastern Congo, including the city of Kisangani. The tide has turned against the rebels. Just a few months of the conflict in the DRC turned into a pan-African. The allies of the government was better equipped, so the success was not long in coming.

The war dragged on with positional battles for the important settlements. Successive military groups constantly staged bloodbath, ruthlessly destroying each other and the civilian population whose life has turned into a bloody routine.

Women in the army, Korea: forced sex, lack of sanitation and hunger

The Congolese people were truly terrified. Living in South Kivu, local residents were afraid to get cows because of the successive military groups and then took away the cattle. In addition, the militants demanded a bribe: each cabin on the dollar — the so-called “tax on safety”. Those who refused to pay, waited for the massacre.

In 2001, an event occurred which largely turned the tide of history was killed by President Kabila. The details of this murder are still not known. According to one version, a Council of war there was a serious quarrel, in which the head of state received two bullets from his bodyguards — one in the back, another in the leg. On the other — in the leader shot one of the Ministers. Kabila was taken by helicopter to hospital, but to save him failed.

Came to power, the President’s son Joseph, who is interested in the fact that as soon as possible to end the war. But the rebels and supporting their African allies were in no hurry to end the conflict. Despite this, in July 2002, the capital of South Africa — Pretoria — Joseph Kabila and Rwandan President Paul Kagame, a Tutsi, signed a peace Treaty. According to the document, Rwandan troops left the Congo to disarm Hutu and Tutsi has received official representation in the country.

However, clashes still not over. Troops of foreign States, left the territory of the Congo, however, more than 70 different insurgent groups remain in the Eastern provinces of the country, especially rich mineral deposits.

These groups are divided into two categories: some use the East of the country as a base to attack neighboring countries — Uganda, Rwanda and Burundi; others are supported by the governments of these countries for illegal extraction of minerals and their subsequent smuggling.Not the end

In the country groups interested in the control of mining. With the greatest importance for them are not even gold and diamonds, and coltan, the value of which in recent years has increased due to the fact that it is used in the manufacture of virtually all modern electronic devices.

The violence in the country also continues. In 2017, more than two million people have fled their homes, another 370 thousand living near the Ugandan border, unable to leave their homes in the near future.

Not the best situation in the DRC capital, Kinshasa. Only 20 percent of peacemillion of the city’s population has a job, most of them get eight or nine dollars a month. The city is almost no fuel, people will get up in the morning to walk to work. A whole day eat nothing and at best their diet consists of cassava and corn tortillas. Less than 30 percent of children go to school, and only a few can afford the luxury of calling a doctor at home.

“At the same time, Congo’s enormous potential. Located in the heart of Africa, this country would connect the North, South, East and West, if only it was road, — writes The Economist. — In its depths hides large deposits of copper, cobalt, zinc, tin, diamonds and gold. In the impenetrable forests, home to thousands of rare animals and plants. The territory is crossed by rivers flowing into the Atlantic ocean. This state could become the most powerful African country, however poor leadership and lack of security make it impossible.”

Congo remains in shambles. More than five million people who are victims of this conflict, died for nothing. The war had demonstrated the terrible cruelty of its participants. Unlike world war II, completely changed the balance of power in the world, the conflict on the African continent continues to smolder.

The diagnosis of Congo has put the same magazine The Economist: “the Territory of the Congo four times higher than France, but there are fewer paved roads than in tiny Luxembourg. On average, women living in the Congo, six children, almost half of the Congolese population under the age of 14. And they are damn poor. Only one in seven of them earns more than $ 1.25 per day. Life expectancy does not exceed 58 years. According to the UK providing assistance to the Congo, by 2030, this country will occupy first place in the world in monstrous poverty.