Milonov said that every country has the right to crazy Deputy

So the Deputy of the state Duma responded to the proposal of a member of the Saeima of Latvia to split Russia into several parts for the sake of peace in Europe. 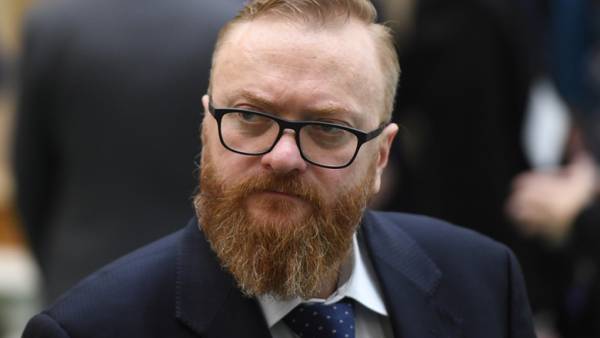 State Duma Deputy Vitaly Milonov said that “every sovereign state has the right to have their idiots”, including in Parliament, reports URA.RU. So United Russia has reacted to statements of the Deputy of the Saeima of Latvia Alexander Kirshtejnsa. Kirsteins called “crush Russia” into several parts based on ethnicity. He believes that then will end the military conflicts, “in Europe will be peace for years to come”.

We do not need to pay attention to other people’s idiots, we have enough of their own. In the end, it is the right of any country to have crazy MP… We don’t have to follow the path of escalation in relations with this small country. On the contrary, we should make every effort to show the Latvians their most friendly attitude.Vitaly Milonov

To split Russia into several parts Alexander Kirsteins suggested in his Twitter. He commented on a post about the death of writer and dissident Vladimir Voinovich, who wrote the unofficial anthem of the Russian Federation.

Earlier, former Minister of transport of Latvia Anrijs Matisse said that the economy of the country has greatly suffered because of disagreements with Russia. Matisse called to restore friendly relations with Russia and cooperation in the economic and political spheres.