Putin has signed several laws, including on disciplinary punishment of judges

Documents published on the official portal of legal information. 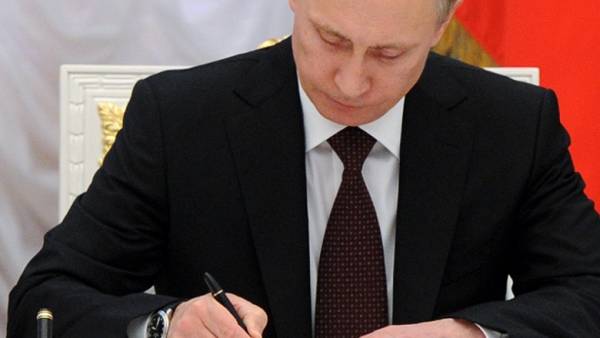 Russian President Vladimir Putin on 30 July signed a series of Federal laws previously adopted by the state Duma and the Federation Council approved. In particular, a new form of punishment for judges, reparation on the part of the car thieves in case of theft or damage to vehicles on administrative responsibility for violations in the shared construction of apartment houses, on payment of the cost of repair from the regional budget for a number of privileged categories, and others.

Putin signed a Federal constitutional law that amends the Federal law “About judicial system of the Russian Federation” No. 1-FKZ of 31.12.1996. According to the document, changing the role of court presidents in judicial appointments and introduce a new disciplinary penalties for judges — a decrease in the qualifying class. In addition, the law says about mandatory audio recording of court hearings and the status of assistant judge, giving him the right to assist in the drafting of judicial acts, take minutes of meetings and perform other actions stipulated by procedural code.

The President also signed a package of laws aimed at the creation of a separate cassation and appeal courts of General jurisdiction. They will cover several subjects of the Russian Federation and represent a structurally independent instance. Thus, appellate courts will be located in Moscow, Saint-Petersburg, Sochi, Nizhny Novgorod and Novosibirsk. Courts of cassation, in turn, will be opened in Moscow, St.-Petersburg, Chelyabinsk, Kemerovo, Krasnodar, Saratov, Samara and Pyatigorsk.