The concert, “Russia in my heart” in honor of the victories of 2018 was held in Moscow

MOSCOW, July 29. /TASS/. Gala concert “Russia in my heart”, dedicated to the sports victories of 2018, took place on Saturday at the Manege square in Moscow. Entrance to the event was free, according to capital GU Ministry of internal Affairs of the Russian Federation, it was visited by about thirty thousand people. 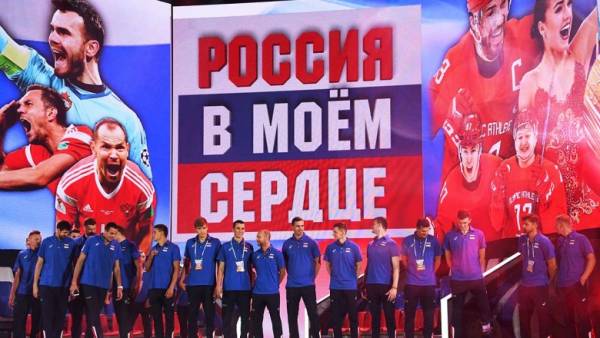 Gathered at the Manege people are not scared even the rain and thunder. For a half hour waiting for the main part of the concert, the audience learned how to dance with umbrellas, and in spite of the bad weather chanted “Russia in my heart!”. Eventually the rain gave up, and came on the stage leading Dmitry Guberniev and Olga Shelest and a team of national pop stars.

“Thank you for what you here so much, despite the weather, — said Nikolay Baskov the crowd. — This once again proves that Russia is in everyone’s heart!”. Christina Aguilera, Stas Peha, Zara, Alexander Marshal, group “Earthlings”, Filipp Kirkorov and Alexander Buinov congratulated the athletes with a hymn the country’s football fans “Russia, forward!”. The heroes of the world Cup, winter Olympics and Paralympics in Pyeongchang has honored Lev Leshchenko, Alexander Rosenbaum, Nadezhda Kadysheva and ensemble “Golden ring”, Gleb Matveichuk, Elena Temnikova, Denis Klyaver and many others. For hockey players sang even sports commentator Guberniev — with children’s musical theatre “Domisolka”.

“Dear athletes, it’s all for you! Thank you for your victory,” — thanked heroes of the evening Polina Gagarina. “So many reasons to be proud of our country!” — said Dima Bilan. Lolita admitted that due to the football team became a cheerleader. “The people who three hours in the rain celebrates our athletes to not win,” — said Oleg Gazmanov.
First came out the players.

First on stage, the floor of which was symbolically constructed in the form of a football field, came the Russian football team and head coach Stanislav Cherchesov. Their success at home the world championship — reaching the quarter-finals — was the highest achievement in the modern history of national football.

Honorary guests of the festival appeared in its full composition, because some players on Saturday started the championship of Russia for their clubs. The players looked a little tired, but smiles greeted the audience. First I took the top, and then addressed the spectators the captain of Russian national team Igor Akinfeev and striker Artem Dzyuba.

“Weather specifically tests our strength. Our family consisted of 23 players plus coaching and medical staffs, but now it has expanded to tens of millions. The main thing — not to stop on reached and to move forward,” said Circassian populations, which was supported by supporters shouting “Russia!”. Similar meaning invested in the words and Akinfeev with Pedophilia, and the latter simply concluded with the phrase “Football is alive!”.

The Sabbath day for the Russian team was very intense — the coaches and the team players visited the Kremlin, where Russian President Vladimir Putin presented state awards to them. The main trainer of Russians Stanislav Cherchesov was awarded the order of Alexander Nevsky, the team’s captain Igor Akinfeev, and defender Sergei Ignashevich — the order of Honor. Other players and coaches received certificates of honor of the head of state.

Also the Russian team were honored at the sports Ministry where the head of Department Pavel Kolobkov and Deputy Prime Minister Olga Golodets presented the players with certificates and signs honored masters of sports. The coaching staff of the national team was awarded the title “honored coach of Russia”.

The number of titled Russian athletes on Manezh square on Saturday was great. They communicated with each other, willingly signed autographs and took pictures with children, volunteers and organizers of the concert. Many guests of the event were especially waiting for a “red machine” — the national team of Russia on hockey, but a pleasant surprise was the presence of domestic volleyball. Serhiy Shlyapnikova in July won the first ever volleyball League of Nations.

“I think there any sport they are very good, and volleyball is no exception. The feeling on stage in front of a crowd is not very different from when you’re in the area — for us it was familiar, only that the rainy weather adds spice to the event. It was nice to be here, albeit thirty seconds. I want to say to the fans that they cheered for us and came to volleyball, because everything that we do — we do for them”, — told reporters the long-term leader of the Russian team Alexey Verbov.

He was supported by Olympic champion in short track 2014, winner of the first award (bronze) the Russian team at the Olympics in 2018 semen Elistratov. The athlete said that for participation in the concert could choose the time in his busy training process, which Elistratov takes place at a base in Novogorsk.

“Many thanks to the organizers for this wonderful event. I hope our success will inspire young kids to play the sport,” said short-track racer in an interview with reporters.

His impressions of the world Cup and the concert, “Russia in my heart” also shared another honorary guest of the event — the Olympic champion in cross-country skiing Alexander Legkov. “I feel proud of our country, the fans come to support the athletes, rejoice with them. It’s nice when you go on stage, and you know, shouting words of support. In General it is necessary to say that athletes in our country love with them are the joys and difficulties,” said Legkov in conversation with TASS.

“Red car” came from the rings

At the end of the concert the audience was waiting for the climax — they again were able to see the hockey team of Russia. The hockey season ended relatively early, but the fans, even against the background of the football world Cup remember the historical Olympic victory for the “red machine”.

Team Russia with the gold medals came on Manezhnaya square in full force, many players brought their wives, and their children dressed in the Olympic sweaters. In addition, players on the fingers wearing the new rings that were awarded to the athletes on Saturday in honor of the victory at the Olympics. With the team at the holiday profit and the heads of Federation of hockey of Russia, including the head of the organization Vladislav Tretiak.

“Thanks to his Majesty the hockey that has United so many people today. Hockey is our pride and the traditions we love him, we are fine as we develop and soccer, and hockey, and track and field, and figure skating, we are a real sporting nation. Championships go, but the infrastructure remains, and that health and strength of the nation, it is extremely important,” Tretyak said to journalists during a concert “Russia in my heart.”

Traditionally most attention among the players enjoyed Ilya Kovalchuk, Pavel Datsyuk and Cyril Whims. Athletes not only were able to reciprocate the kindness and friendliness of the fans, but did the team photo behind the scenes.

“The world Cup ended only recently, and all the positive emotions remain. We, the players, are also very pleased that this tournament was held in our country and was held at a high level. I want to Express my gratitude to the Russian fans that they have supported us always, when we played well and when played badly. Today was a lot of fun sensations experienced unforgettable”, — shared his emotions with TASS Datsyuk.

“Such events are a vital necessity”

Despite the huge attention of the audience to the concert and corresponding mass event, it is, according to GU MVD of Russia in Moscow, took place without incident. “The police and Regardie provided protection of a public order and security, violations are not allowed”, — told TASS in the Department.

In addition to the high level of organization, the concert “Russia in my heart” I remember the incredible atmosphere of unity and solidarity. It felt not only athletes, but artists that delighted the guests of the festival with their performances.

“Today we felt the unity of our great athletes from all over the country. Lately the whole world shows interest in Russia, and I feel very proud that foreigners had the opportunity to get acquainted with our country and culture better. We really are big fellows, today we had it again feel. For our athletes, I feel a great sense of pride, and such events consider a necessity,” — said a famous Russian singer Dima Bilan.