Erdogan asked to accept Turkey into the BRICS

MOSCOW, 29 Jul — RIA Novosti. Turkish President Recep Tayyip Erdogan during the meeting on the sidelines of the BRICS summit in Johannesburg (South Africa) called on the leaders of the bloc to allow Turkey to join the BRICS, according to the newspaper Hurriyet Daily News. 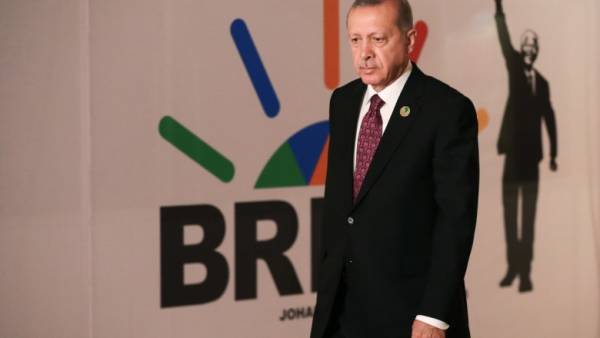 “I said if you accept our Alliance, the block will be called BRIXT,” said Erdogan to the journalists on July 27, adding that the BRICS members “warmly welcomed” the proposal.

These five countries (the BRICS. — Approx. ed.) are included in the G20, I wish they had taken the necessary steps to receive us, and we took its place in BRICS. Recep Tayyip Erdogan The President Of Turkey

As previously reported, Russian President Vladimir Putin said that increasing the number of BRICS countries is not planned yet, but noted that the BRICS leaders did not rule out the prospect of expanding the membership of the group. He added that the candidates for accession to the BRICS has the desire, but all colleagues in the organization are careful in this regard. According to the Russian President, “the organization is open”, but the question of the accession of new members requires “further study”.

The BRICS summit was held from 26 to 27 July in Johannesburg. During the meeting, the leaders signed the Johannesburg Declaration on the results of ten years of work of the organization. Signatures under the document were put by President Vladimir Putin, Chinese President XI Jinping, Prime Minister of India Narendra modi, President of Brazil Michel Temer and the owner of the current jubilee summit — the leader of South Africa Cyril of Ramaphosa.