MOSCOW, July 25. /TASS/ — According to the source TASS, Sergei Shlyakov and his associates received 1 million rubles, promising to “sell” the position of Governor of one of the regions. 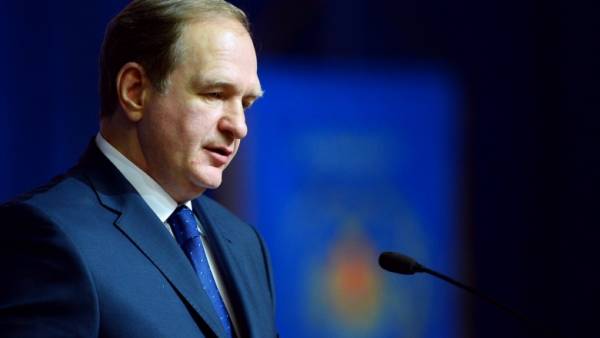 Former first Deputy head EMERCOM of Russia Sergey Shlyakov is suspected of fraud in the sale of the post of Governor of one of the regions for 1 million rubles. About this TASS said a source in law enforcement bodies.

“The former first Deputy head EMERCOM of Russia Sergey Shlyakov was suspected of selling position for the post of senior officials of one of subjects of the Russian Federation, without actually being able to render the promised assistance,” — said the Agency interlocutor.

He added that, according to the investigation, Shlyakov did not act alone. “The group consisted of, besides him, three more. They “sold” the position of Governor for 1 million rubles. Events relate to the period starting in mid-2015,” added the source.

He said that high school was arrested only now, at the end of the interrogation. “The investigation as early as Thursday plans to go to court with the petition for election to it measures of restraint”, — reported in law enforcement. The interlocutor of the Agency noted that the collection of evidence involved in the management of “B” of the Main Directorate of economic security and counteraction of corruption of MIA of Russia.

The source added that criminal case under article 159 of the criminal code (“Fraud”), which is in production of the investigative unit of the Main investigation Department of the MIA of Russia in Moscow.

Currently, the TASS has not received the operational review of the MIA of Russia.