The investigator after being tortured went to the army

SK explains how the audit was conducted on the complaint of the beating in the Yaroslavl prison. 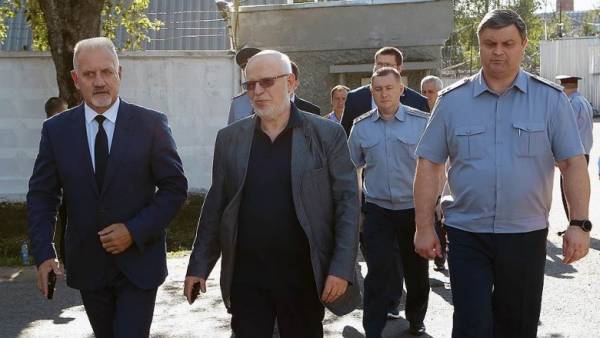 SU TFR in the Yaroslavl region checks the work of a former employee of the Department, which last year refused to initiate a criminal case on allegations of torture in IK-1 convicted of Evgeny Makarov. The beating was on video. It turned out that the ex-investigator is in the army. Monday was detained six employees of a colony, are expected to further detentions. IR-1 called for the head of the HRC Mikhail Fedotov and the first Deputy Director of the Federal penitentiary service of Russia Anatoly Rudy. According to the service representative, beaten convict himself provoked the conflict.

Against the former investigator of the investigation Department of the Zavolzhskiy district of Yaroslavl SU TFR in the region, Lieutenant of justice Rodion Svirsky launched a procedural check in connection with the criminal case about tortures in penal colony No. 1. About this “Kommersant” reported the official representative of Department Christine Gusovsky.

Svirsky carried out the inspection at the request of lawyers about the torture of the convicted Evgeniya Makarova in the IR-1 July 29, 2017 and August 10 issued a ruling on refusal to initiate criminal proceedings.

This beating was captured in a ten-minute video released last week by the human rights Fund “Public verdict”. On it a crowd of men in uniform brutally beating up the prisoner. The other day SK filed a case on this episode of under paragraph “a” part 3 St. 286 UK RF (exceeding official powers with use of violence), which provides for punishment of three to ten years of imprisonment.

As it turned out, Rodion Svirsky does not work in the UK. In November last year, he was drafted into the army and is in the service so far, explained Ms. Gusovsky.

On Monday, investigators arrested six employees of IK-1. “They will be working until late in the evening”, — told “Kommersant” in SU TFR. It is expected that the investigation will be released to the court with petitions for their arrest on Wednesday. On Tuesday, the expected detention was specified in the administration. Just the video clip shows 17 people, another shot a beating on the Registrar.

Meanwhile, the lawyers fear that a new investigation can be carried out not at the proper level. According to them, one of the members of the investigative group created in the first Department for investigation of particularly important cases of the SU TFR account for relative party video beating a prisoner. In a press-service of SU TFR explained to Kommersant that they had no such information. In addition, human rights activists suspect the relationship of the Deputy chief of IK-1 Higuita Mikhaylov and Deputy head of the Yaroslavl office of public Prosecutor for supervision over execution of laws in correctional institutions named Mikhailov. Currently, the “Public verdict” is looking for confirmation of this information, told “Kommersant” the lawyer of Fund Irina Biryukova. She and her family left Russia because of the incoming threats. The Federal chamber of lawyers of the Russian Federation received her statement with a request for assistance in the provision of state protection.

Monday IR 1 was visited by the Chairman of the presidential Council of the Russian Federation on human rights (HRC) Mikhail Fedotov and the first Deputy head of the Federal penitentiary service Anatoly Rudy. Mr. Fedotov on the audit promised to seek state protection for Irina Biryukova and her family. The incident in Yaroslavl prison, in his opinion, should be a lesson as investigators, and prison staff. The head of the HRC noted that correctional officers should not have to remove the DVRs while working, and for guards it is necessary to provide “serious consequences” in case of use of means of restraint without video recording.

According to Mikhail Fedotov, in 2017, about ten times refused to initiate criminal cases on allegations of crimes in the penal colony No. 1. All of these materials, he added, will be studied again.

Mr. Rudy, in turn, suggested that “short-sighted stupid employees” of the colony, caught on video, tried to hide the video when you check. “I believe that this entry from one of them left, and then was just sold,” — said the first Deputy head of the Federal penitentiary service. In his opinion, “the situation was provoked by certain forces”: Eugene Makarov was 136 violations, and he “behaved very aggressively, caused constantly a conflict the administration was constantly trying to make against him was kind of extreme response personnel”. Earlier on the Agency’s website posted the message: “the Leadership and staff of the FSIN strongly condemns the behavior of such employees and regretted that the UIS there are cases that diskreditiert service”.