MOSCOW, 17 Jul — RIA Novosti. The European court of human rights (ECHR) refused to the relatives of Anna Politkovskaya in the imposition on Russia of responsibility for the death of the journalist “the New newspaper”, reported the press service of the Ministry of justice. 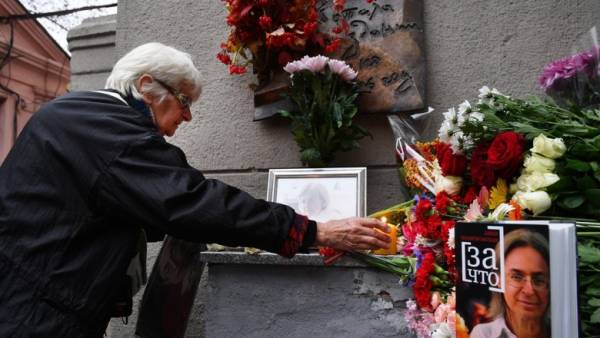 “The ECHR did not agree with the argument of the applicants and declared the complaint in this part is unacceptable,” — said in the message.

The Ordinance has not yet entered into force and may be appealed within three months.

The court ruled that the Russian authorities should pay to the victim’s family compensation for moral damages in the amount of 20 thousand euros.

The European court stated that in Russia the investigation has produced tangible results that allowed a conviction.

However, the ECHR were not satisfied that the investigation is ongoing, despite the provided by the Russian authorities, the materials of the improper execution by the authorities of great Britain and Northern Ireland Russian requests for legal assistance.

The murder of Politkovskaya

Known as an investigative journalist Politkovskaya, who in 2003 received the OSCE award “For journalism and democracy,” was shot in Moscow in the stairwell of her apartment block in October 2006.

Motive the consequence considers dissatisfaction with her journalistic work, however, customers of murder are not found.

Life sentences for the execution and organization of the crime were Rustam Makhmudov and Lom-Ali gaitukayev. Their accomplices Ibragim Makhmudov, Dzhabrail Makhmudov (the brothers of Rustam) and the former militiaman Sergey Hadzhikurbanov received 12, 14 and 20 years of a colony of a strict mode.

The former police officer Dmitry Pavlyuchenkova, who organized the surveillance of a journalist, was sentenced to 11 years in prison.

Gaitukayev died in the colony in June last year.