Trump said about a possible meeting with Putin in July 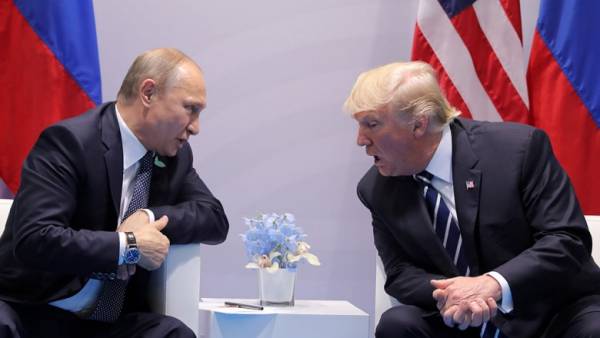 “I consider meeting with Putin in July” — quoted in Thursday trump Bloomberg.

Earlier Thursday, the official representative of the Council of national security of the United States Garrett Marquis tweeted that the adviser to the American leader for national security John Bolton arrives in Moscow to discuss a possible meeting of the heads of the two countries.

Advisor to the President of the USA John Bolton will go from 25 to 27 June in London, Rome, to discuss security issues, and will go to Moscow to discuss a possible meeting of the President of trump with Putin.the official representative of the Council of national security of the United States Garrett Marquis

Previously some foreign media speculated that the meeting of presidents of Russia and USA Vladimir Putin and Donald trump can be held in the middle of next month — after the NATO summit in Brussels on 11-12 July in one of the European capitals. According to some media reports, as one of the options we consider in Vienna.

In particular The Times, citing sources, said that “the American official representatives consider the possibility of holding meetings or before a NATO summit, or at the conclusion of the visit trump in the UK”. The newspaper claims that London is alarmed by the possibility of a meeting in July — especially if that meeting will occur before the NATO summit. The meeting of Putin and trump, according to sources, British Newspapers, can affect the discussion of the “deter Russian aggression” during the summit of the Alliance.

Press Secretary of the President Dmitry Peskov, said on 19 June that there is no clarity on the meeting between Putin and the tramp is still there. Previously, he stressed that the option of a meeting between the presidents of Russia and the US before the NATO summit is not considered.