The presidents of Russia and Ukraine held a second time in a month a telephone conversation, during which discussed the situation in the Donbass and the exchange of detained persons. Petro Poroshenko urged to allow the Ukrainian Ombudsman to the Director Oleg Sentsov, which a Russian court has sentenced to 20 years in prison. After the meeting, Vladimir Putin also discussed the conflict in the East of Ukraine with permanent members of the security Council. 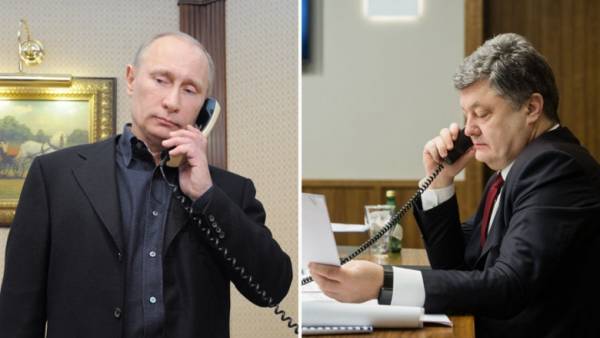 Russian President Vladimir Putin and his Ukrainian counterpart Petro Poroshenko held a second in the last month a telephone conversation, during which discussed the exchange of prisoners citizens, the Minsk agreements and the settlement of the situation in Ukraine. About it reported in a press-service of the Kremlin. The conversation took place at the initiative of the Ukrainian Chapter.

In particular, the leaders discussed the importance of revitalization of the “Norman format”, which is set to deploy on the territory of Donbass international UN peacekeeping mission.

The Russian President expressed concern over the worsening situation in the Donbass. According to him, the recent increase in the number of casualties among civilians as the result of the frequent attacks in the region the Ukrainian security officers.

In addition, the heads of state again discussed the issue of exchange of detainees and visits to their authorized on human rights in both countries.

So, Petro Poroshenko called for the release of Ukrainians who are in Russian prisons.

He also asked to allow the Ukrainian Commissioner for human rights Lyudmila Denisov prisoners, in particular, to the Director Oleg Sentsov, which a Russian court has convicted of preparing terrorist acts on the territory of Crimea.

After talking with Poroshenko, the Russian President discussed the situation in Donbass and Russian-Ukrainian relations with members of the security Council. This was reported by press Secretary of the President Dmitry Peskov. The meeting participants discussed the measures to settle the conflict in Eastern Ukraine.

Earlier Dmitry Peskov also explained, why prolonged visits to prisoners of Ukrainians in Russia. According to him, the commissioners for human rights in Ukraine and in Russia, Lyudmila Denisova and Tatiana Moskalkova verify their purchases lists of the prisoners, who will be attending.

“Besides, as far as we know, the ombudsmen discuss how they will be attending synchronously, asynchronously, at the same time. These discussions lead to the fact that the time is delayed. In addition, there were plates with the movements due to weather conditions. Ukrainian counterpart could not fly. In General, this process is quite difficult, but it is being conducted,” said the spokesman.