MOSCOW, 19 Jul — RIA Novosti. A number of weaknesses identified at the military multifunctional robot “U-9” during its application in Syria, the report of the third Central scientific research Institute of the Ministry of defense of Russia, at the disposal of RIA Novosti. 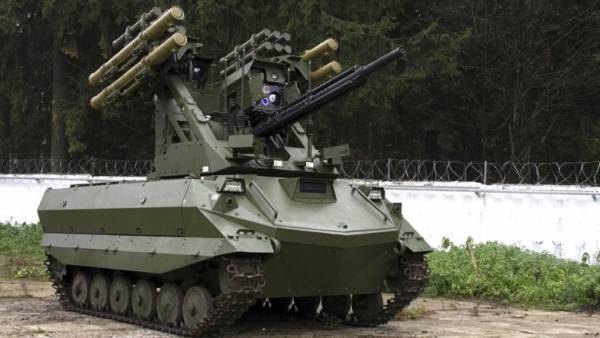 According to the report, military experts found shortcomings in the management, mobility, firepower, reconnaissance and surveillance functions of the robot.

It is noted that in independent movement “Uranus” revealed a low reliability of the chassis — support and guide rollers and suspension springs. In addition, the robot has shown unstable operation 30-millimeter automatic cannon, delayed triggering of the objectives of the start-up, failure of the thermal channel optical sighting station. Military experts also consider it a great lack of “Uranium” failure to fire in motion.

As follows from the materials of the report, the robot can conduct reconnaissance and identify targets at a distance of not more than two kilometers. In addition, there are claims to the sights, observation devices and screens operators.

Existing military robots are encouraged to apply during the storming of the objects and fortified areas, as well as for the destruction of armoured and fire weapons in conjunction with combat engineering and military units. At the same time, the report notes that military robotic systems in the next 10-15 years is not able to perform tasks in combat.