Alexander Shestun arrested on charges of abuse of office. 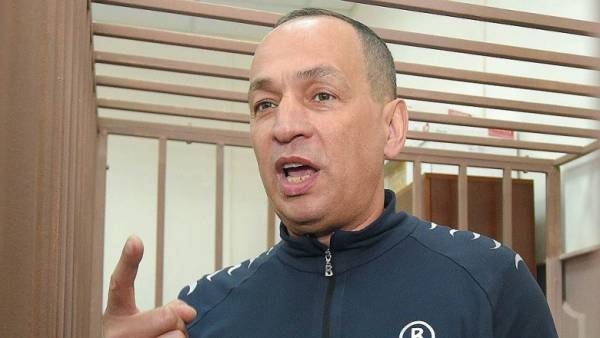 Basmanny court of Moscow arrested until August 13, the head of the Serpukhov area of Moscow suburbs Alexander Shestun. The investigative Committee of Russia (TFR) imputes to him the guilt of excess of powers of office: according to investigators, the official illegally transferred to the privatization of four plots of land, thereby causing damage to the amount of 62,8 mln. mister Shestun called the criminal case “bullshit”, but the court his opinions are not shared.

The hearing, which considered the petition of the main investigation Department (GSU) of the RCDS about the arrest of the head of the Serpukhov area Alexander Shestun, began with a delay. The fact that it was originally envisaged to hold hearings in a small room, but there was no place for journalists: all the chairs were occupied by detectives and police officers. Yulia Safina presidency decided to postpone the meeting to another room. Meanwhile, Alexander Shestun, as he was escorted down the corridor, managed to say: “Fully paid. Not pleaded guilty, all this hypocrisy and bullshit”, he said.

At the beginning of the meeting, the defense asked to adduce medical records of the defendant, and the testimony of the children’s father and 35 pages of positive characteristics and copies of documents on state and public awards, among which was a medal “20 years withdrawal of Soviet troops from Afghanistan.” In addition, the attorneys requested the interrogation of the wife of Alexander Shestun: “She was present during the search, which the defense was not allowed”. In the end, Yulia Safina material to the point decided to involve and the spouse of the official is not to question because she did not have to come to court before the official discontinuation of the citizens.

Then there was another hitch: the lawyers demanded that the court ordered the investigation to adduce the passport of mister Shestun. “The investigator refused to take him during the search — said one of the defenders.— Now will claim that due to the presence of this document Shestun may be hiding abroad.”

After this, the CCJ said that the criminal case against the official was brought under part 3 St. 286 UK RF (exceeding official powers with the infliction of grievous bodily harm). According to the investigator, at the moment in four episodes.

“From 2008 to 2014 Shestun has carried out illegal transfer of four plots of land in the Serpukhov district of the Moscow region, thereby causing damage of more than 62 million rubles, — he said. The investigation continues action check Shestun at the head of the district, we cannot exclude the charges against him in other episodes.”

The representative of the RCDS, grounding his request on the conclusion of mister Shestun into custody, brought quite standard arguments: being at liberty, the head of the district, according to the investigation, can disappear, put pressure upon witnesses, many of whom are his subordinates, to prevent the collection of evidence or otherwise hinder the investigation because the officer has extensive contacts in law enforcement. Attorney the petition of the investigator hold.

Meanwhile, the catechumens judge materials became known that the facts that formed the basis of the investigation, has previously been issued 14 waivers in criminal cases. Mister Shestun, speaking in court, complements this figure with new data. According to him, the police not only “a hundred times” checked all the facts of granting land plots, but even the Prosecutor’s office appealed to court with the requirement these transactions to cancel, but was refused.

“After that we have addressed in arbitration with claims about cancellation of transactions with land, but the court considered them legitimate”, — said the head of the district. He re-tied his business with threats coming, he said, from security forces and officials in connection with his intention to go to the next election. “The investigator showed fototablitsy with some houses in these areas, but you can go to see: there are now shopping centers that generate revenue Serpukhovskoy district,” said mister Shestun. He added that his dependent there are five children and 85-year-old mother, and asked not to sign him in jail.

Lawyer Pavel Bespalov insisted in court on illegality of actions of the security forces during the detention and search of an official, which defenders are not allowed. He added that decisions on the allocation of plots was taken by the district administration collectively and was signed by the first Deputy of mister Shestun, who on interrogation revealed that pressure on him was not proved. The defence also indicated that prices for land in those days fit into the established norms, so to talk about the damage unauthorized. Another defender of mister Shestun Alexei Binetsky said that getting official in jail, given its conflict with the security forces unsafe for the accused. Both attorneys asked to elect a measure not involving detention. However, the court made a different decision and the petition of the investigation is satisfied, sending Alexander Shestun under arrest until August 13.