MOSCOW, 14 Jul — RIA Novosti. Prime Minister Dmitry Medvedev held a meeting with the head of “Rosneft” Igor Sechin, the parties discussed the issues of functioning of the fuel market, the corresponding message is published on the website of the Cabinet. 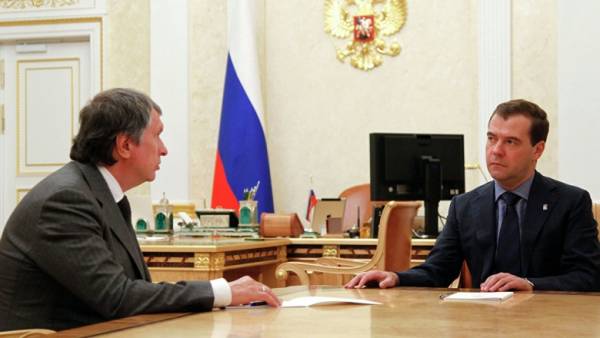 “During the meeting discussed the functioning of the fuel market, including in the context of the government’s decisions on the stabilization of gasoline prices”, — stated in the message.

Also, Medvedev and Sechin discussed the results of activity “Rosneft” in 2017, a major current and future projects of the company.

Prices for oil products in the Russian Federation in recent years has increased dramatically. In may and early June, retail gasoline prices have exceeded the levels 41, 42 and 43 rubles per liter. The Cabinet adopted a decision to reduce the excise tax on gasoline and diesel fuel, and agreed with the major oil companies that they are on time decision-making support the industry fix the prices at 30 may. In early June, the Ministry of Finance proposed to give the Cabinet the right to raise export duties on gasoline, diesel fuel and kerosene up to 90% from the duty on oil, in particular, if the company violates the obligation to freeze prices.

At the end of may the Federal Antimonopoly service issued a warning of “Rosneft” because of the decline in company sales of petroleum products, which in turn, according to authorities, could lead to higher prices for gasoline AI-92 and AI-95. Also FAS asked three companies of Gazprom group to justify the increase in export sales of gasoline on the background of its rise in price in the domestic market.