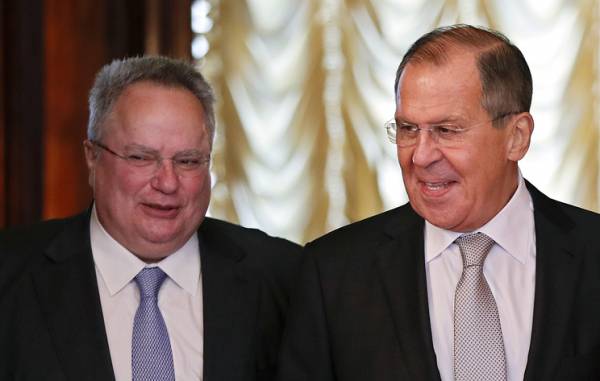 MOSCOW, June 13. /TASS/. The Minister of foreign Affairs of the Russian Federation Sergey Lavrov and foreign Minister of Greece Nikos Kotzias held on Wednesday, the negotiations, the subject of which was the bilateral cooperation, Russia’s relations with NATO and the European Union, as well as international issues.

Lavrov at the opening meeting recalled that this year Russia and Greece celebrate the 190th anniversary of the establishment of diplomatic relations and the 25th anniversary of the signing of the Treaty of friendship and cooperation, and drew attention to cooperation between the two countries in tourism and trade. “Now this program is a very large-scale joint activities in the field of tourism. I hope that today we will discuss trade-economic component of our relations, which demonstrate the good momentum, and, of course, humanitarian ties,” he said.

In turn, the head of the Greek foreign Ministry, responding to the welcome speech colleagues and wished the Russian national football team success in the home championship.

After negotiations, the Ministers went to the press in good mood. The journalists had the impression that at the entrance to the hall where took place a press-conference Lavrov and Kotzias exchanged witty comments, as they both laughed.

The foreign Ministers of Russia and Greece, summing up the discussion, noted its content and said that they would continue the discussion during a working lunch. “We stressed our commitment to preserve and expand the legacy left by our predecessors and those relationships that go back centuries,” said the Russian foreign Minister, referring to the positive dynamics of our trade and strengthen ties in investment, energy, scientific-technical and law enforcement areas.

Kotzias also invited Lavrov to visit Athens in September, and the Russian Minister gave a positive response: “Thank you for the invitation to Greece, I will definitely come”.

Respect for the principle of the indivisibility of security

Greece is one of the oldest members of the Alliance, so the Russian Minister took the opportunity to Express the concern of Moscow in connection with the ongoing process of increasing military activity U.S. and NATO close to Russian borders.