The catamaran brought consequent on boat base

Detained the head of the Volgograd yacht club. 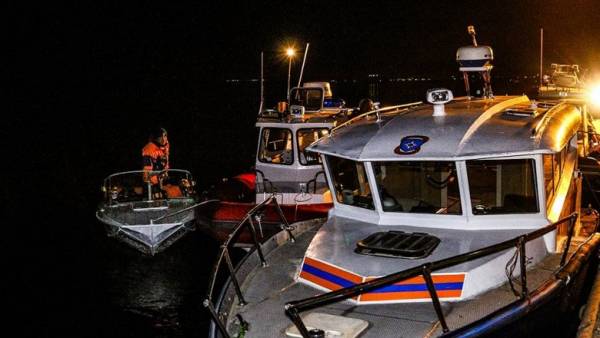 In Volgograd in the course of a criminal investigation of the collision of the catamaran “Elan-12” and cargo ship “Captain Vecherkin” detained General Director of OOO “Marina” Leonid Zhdanov. The consequence considers that he, as the head of the boat did not stop the ship, overlooking the waters of the Volga with disabilities. In the Volgograd State inspection on small size vessels (GIMS) argue that when testing the boat station at the beginning of navigation have not revealed any shortcomings in its work.

Investigators of southern investigatory management on transport have detained General Director of OOO “Marina” 47-summer Leonid Zhdanov. He owns the boathouse, which was a catamaran “Elan-12” sank on the evening of 11 June at 250 m from the promenade of Volgograd. The consequence considers that Leonid Zhdanov has not taken any action to prevent the release of a boat in the waters of the Volga. The detention was carried out in the course of investigation of criminal case upon infringement of safety rules of movement of water transport, which led to the collision of the boat and cargo vessel.

As reported by “Kommersant”, a 12-seater catamaran collided with a cargo ship “Captain Vecherkin” near the monument “the Extinguisher”. The catamaran sank, there were 16 people, ten of them were killed immediately, and five saved. Three people rescued crew of “Captain Vecherkina”, and two more arrived on the scene rescuers. One woman until Tuesday morning was reported missing, rescuers discovered her body when he brought up the catamaran from the bottom of the river.

The sunken boat, owned by the former head of kalachevsky district of the Volgograd region Dmitry Hahaleva, was not registered and did not stand on the account in GIMS 2017.

The consequence considers that the owner of the vessel was drunk, moving in the dark without navigation lights, ignored the lights and audible warning signals from the ship, and at full speed crashed into him.

According to rostransnadzora, the ship did not have the rights to carry passengers, it was missing life jackets. All the victims have been identified, including the owner of the catamaran Dmitry Hachalav. Investigators searched the house of Mr. Hahaleva.

In the administration of the Volgograd region reported that all core services have been instructed to inspect the conditions of storage and use of all courts, including providing tourist and transportation services, for compliance with the current legislation. “Mandated to provide necessary medical assistance to victims, as well as all necessary assistance to the families of the victims”, — noted in the regional administration.

The detainee Leonid Zhdanov in addition to the Pristan, OOO belongs to “Volga Marin”. Both companies are registered at the same address with the yacht club “Volga breeze”, which has positioned itself as one of the largest on the Volga. The yacht club is engaged in repair, maintenance and conservation of water equipment, the sale of boats and engines. In Pristan, OOO “Kommersant” said that as the head of the company under investigation, to comment on security forces identified violations none.

The chief of Department of safety of people on water objects (BVI) of EMERCOM of Russia in Volgograd region Victor Bazhanov told “Kommersant” that the staff of the boathouse, which was a catamaran, had to ensure that he was going into the water without disturbances. Employees GIMS, according to him, only taking the boat ramp at the beginning of the navigation and other controls for it don’t realize.

There was supposed to be provided with exhaust mode — the barrier between the pontoons, at the exit of the vessel, the skipper must present operational documents to the responsible officer of the station, only then it could release into the waters.Victor Bazhanov, the head of Department of safety of people on water objects (BVI) of EMERCOM of Russia in Volgograd region

According to him, GIMS checked the station at the beginning of the navigation, but found no violations. “There was a journal in which shall be recorded the outputs of the courts, but it was clean, because not yet started to work.

All that is necessary, at that time. Now, however, the inspection revealed that there is something missing. But it is the responsibility of the head of the base, — said the employee of the state Inspectorate for small vessels.