The dispute about the name is allowed. As it is now called Macedonia?

One of the longtime diplomatic conflict is close to resolution: the government of Macedonia and Greece agreed to rename the former Yugoslav Republic of Macedonia in the North. 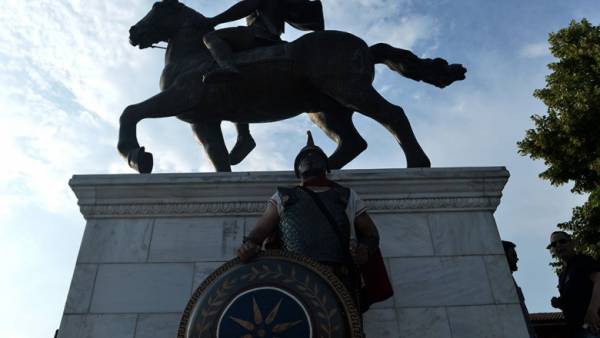 “We agreed,” — said the Prime Minister of Greece Alexis Tsipras.

The dispute about the name that erupted after the collapse of the former state of Yugoslavia, 27 years of complicated relations between countries, and also prevented the entry of Macedonia in NATO and the European Union.

The Greeks objected to the fact that neighbouring Balkan country was called the same as the Greek historical region in Northern Greece, on the border with Macedonia, fearing a possible territorial claims.

Apprised of the compromise, told the conference in Skopje the Prime Minister of Macedonia, Zoran Zaev. The new name of Zaev and Tsipras agreed with the mediation of the special representative of the UN Secretary General, Matthew Nimitz.

The new name must still be approved by lawmakers in both countries.

What’s in a name?

A country with a population of just over 2 million people, formed after the breakup of the former Yugoslavia and occupied the southern part, expressed a desire to be called Macedonia in 1991.

142 countries, including Russia, has recognized the Balkan country as Republic of Macedonia. Greece opposed.

To settle the dispute it was decided to call Macedonia “the Former Yugoslav Republic of Macedonia (FYROM)”.

Athens also accused the authorities of the new Republic in the theft of the cultural heritage of Greece and in 2008 blocked the admission of Macedonia in NATO and the EU demanding to change the name.

Why is Macedonia so many years rested?

The authorities of the former Yugoslav republics after the disintegration of Yugoslavia set out to write a story for his new state.

And if the capital felt relatively easy — it was the city of Skopje, provincial during the time of Yugoslavia, but still had a long and very colorful chronicle (where, for example, in the 1st century BC the Romans made a military camp, and subsequently formed a Roman colony), the cultural situation was not so good.

To solve this issue, in 2010 the then Prime Minister Nikola Gruevski through the project “Skopje 2014” was launched a process of “antiquization”, designed to find the ancient roots of the nation and inhabit the city’s cultural attractions.

In the framework of antiquization actively promoted the theory that the modern Macedonians are not Slavs and direct descendants of the Macedonians of antiquity.

It was built new sites of cultural significance, in particular, the Museum of the Macedonian struggle, Macedonian Opera, arch of triumph “Macedonia”, the national theatre, the new bridge over the Vardar river or the numerous monuments of different historical figures.

Main among them — a monument to Alexander the great on Macedonia square, hoisted on the lion surrounded by a thick pillar, and a monument to his father, Philip II, king of Macedonia (ancient Greek).

Skopje airport is also suddenly was named in honor of Alexander the Great.

Against it strongly objected not only Greece who adopted a similar perpetuation of their national heroes as an attack on our historical heritage, but also many Macedonians perceive the abundance of new architectural buildings and monuments as excess and kitsch.

In addition to the development of the project was supposed to spend 80 million euros, but in April 2013 the government of Macedonia has recognized that already spent 200 million euros.

The supporters of the idea pointed to the fact that with the emergence of new cultural attractions has increased the influx of tourists in Skopje.

What made the Macedonian government to reconsider?

Everything changed with the arrival in may of 2017 to power a new Prime Minister from the Social democratic Union of Macedonia Zoran zaeva.

Before the election he announced that the country’s accession to NATO and the European Union is a priority and that he is willing to discuss the possibility of renaming the Republic of Macedonia to negotiate with Greece.

The new administration began to gradually depart from antiquization and renamed Skopje airport as the leading in Greece the motorway, which also lost belonging to Alexander the Great, and became known as simply “the highway of friendship.”

How to choose a new name?

After months of negotiations and deliberation, the parties have made the shortlist of three names: “New Macedonia”, “Northern Macedonia” and “Upper Macedonia”.

“Zaev chose names that he wants,” — said the Minister of foreign Affairs Nikos Kotzias on Monday in an interview with Greek TV Kontra.

According to Agence France-Presse, the basis of the new arrangements lies a 20-page working agreement developed in the course of negotiations between Cotzias and his Macedonian counterpart Nikola Dimitrov.

The agreement will in particular stipulates that the Macedonian language has Slavic roots and has its origins in Greek antiquity.

“It is obvious that [Macedonia] is irrelevant to the ancient culture [of Macedonia]…and that their language belongs to the Slavic group of languages,” said Cotzias.

On Monday the Prime Ministers of both countries Alexis Tsipras and Zoran Zaev had a long chat on the phone, finally utresa the nuances of the agreements.

Why now and what does Russia?

As one of the main causes of intensifying the negotiations on the name of the observers point out the growing influence of Russia in the Balkans.

As noted recently, the U.S. Ambassador to Greece Jeffrey Platt in an interview to the Greek TV channel Skai TV, if no decision around the name is not found, it will have the “geopolitical consequences”.

“We have seen malicious influence of Russia in particularly rough shape in October 2016, when was the attempted coup in Montenegro, where were all the prints of the Russian track. And it is evident throughout the region,” the Ambassador said.

“There is a growing desire of the Kremlin to throw confusion on the subject of [geopolitical] orientation of the countries of the region, as well as the entire process of reform and Euro-Atlantic course, which has been elected by the citizens of these countries,” the Ambassador said, adding that the US sees Greece as a “support stability in this sensitive region”.

The same mood was reflected in the working document of the parliamentary Committee on foreign relations of the British house of lords.

As written in February 2018, the Greek newspaper “Vima”, the Committee of the British Parliament urged the government to support the accession of Macedonia to NATO because it “will serve as an important step towards greater stability in the region.”

Besides the 28 June summit of the European Union, 11 July NATO summit, and both countries wanted to break the deadlock before this date.

EPA, With the resumption of negotiations between the two countries has resumed and the protests in Greece: demonstration in the city of drama 6 Jun 2018 against the use of the name “Macedonia”.

Whether this will satisfy all parties?

Last Wednesday across Greece held rallies at which speakers urged the authorities not to go on any compromise over a disputed name, pointing out that Macedonia is one and only Greek.

In Macedonia, too, of course, there are those who want easy to abandon the attempt to find ancient roots — especially when it spent significant funds — however the former Yugoslav Republic of are more inclined to compromise for the sake of joining NATO and the EU.

The reviewers point out that even the resolution of this dispute and the lifting of Greece’s veto can’t decide for Macedonians, the question of accession, as the number of countries in the bloc opposed further expansion of the EU, in particular France, the Netherlands, Belgium, Luxembourg and Denmark.