Moscow. June 7. INTERFAX.RU About a half — hour live broadcast is not enough 16-th program “Direct line with Vladimir Putin” to beat the record for duration, recorded in 2013. 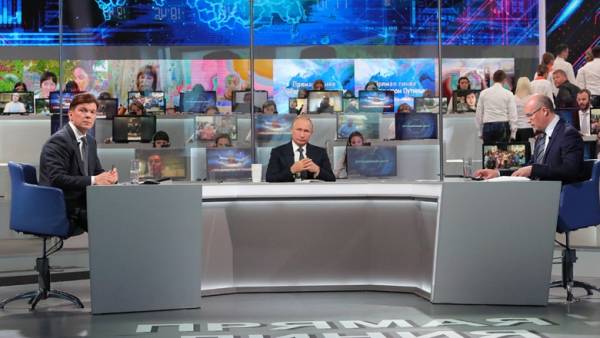 The head of state at this time, answered citizens ‘ questions in live 4 hours 17 minutes and record of 2013 was 4 hours and 47 minutes.

During the “straight line” Putin managed to answer about 65 questions.

During the live broadcast the President received about 3 million hits. Concluding the program, President Vladimir Putin promised: “just as in previous years, we will review all questions received, will make of it, to understand the trends of today, the concerns of the citizens, and to respond to them not only individually, but also to generalize them in order to make changes in the work of the government in the coming years.”

This time the program “Direct line with Vladimir Putin” was in a new format. At the same time in touch with the Studio were almost all members of the government and heads of regions, which the President had forwarded certain questions.

In addition, at the request of the President answered the questions of the citizens of heads of regions such as Tomsk, Oryol, Tyumen, Rostov and Ivanovo region, Stavropol Krai and Yakutia.