“Direct line” with Putin: the reaction of the Western media

“Straight line” with Russian President Vladimir Putin ended a few hours ago. In the world are also closely watched the live broadcast. “Recent comments” gathered the most vivid comments to foreign media. 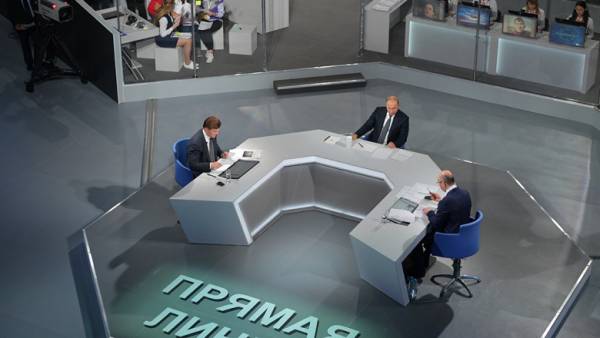 Most news sources, of course, was interested in the statements of Vladimir Putin about relations with Western countries. In particular, NBC News drew attention to the President quoting Einstein:

I don’t know what weapons will be conducted a third world war, but world war IV will be fought with sticks and stones.

However, the American edition of Business Insider took Putin’s remarks not as a call to end the confrontation, and as a threat. The authors write that Russia is a nuclear power, and, if necessary, Putin can unilaterally start a war.

The Telegraph also focused on the idea of Putin about the Third world war, and touched on in my review some more. In particular, one of the issues was the preparation of Russian cities for the coming world Cup. Did not remain without attention and the speech of football coach Valery Gazzaev, who live mentioned saints and wished the President good health. The article also noted that such format of communication with the governors stressed the weight of the Russian President.

Reuters reports that Russia has no plans to withdraw forces from Syria, and that they will be as long as it is in the interests of the state. But the British version Reuters has dedicated an article relevant today, the problem of relations between European countries and the USA since the decisions of the trump on the introduction of duties on steel and aluminium to Europe. The publication quoted the Russian President: “I warned you”.

During the broadcast of Vladimir Putin recalled the Munich speech and said that while European countries did not listen to his words about the risk of increasing the influence of the United States and did not realize that this problem will affect not only Russia.

ABC News draws attention to the fact that Vladimir Putin accuses Western countries of putting pressure on Russia, and that the perception of the Russian state as a threat to the world community is erroneous. However, the authors remind that the sanctions were imposed on Russia over the annexation of Crimea and support for separatists in Eastern Ukraine, thus the channel is disputing claims by the Russian head of state.

However, German newspaper Bild have focused on the fact that Vladimir Putin paid a lot of attention on domestic issues. To the fore they put the statement of the President that every Russian family should be at three children. Were given other examples of responses and the orders of Putin. The purpose of the broadcast publication sees in the idea of Vladimir Putin as simultaneously compassionate people of the country, and a strong, hard in communication with the governors and Ministers.

Newspaper the Independent provided a General assessment of the last broadcast, and comments on Russia were quite sharp. Thus, the “direct line” was recognized as “well-controlled and dangerous spectacle,” which is the embodiment of a new feudalism. The authors note that this year even removed the spectators, it was replaced by screens to communicate with governors and Ministers. In this case the internal matters of the state, Putin seemed sincere and compassionate, and foreign policy — showed arrogance, believe the authors.

The German newspaper Die Zeit believes that the issues in the show was staged, but they still reflect the problems of Russian citizens. Among the important foreign policy issues on the agenda apart from the already mentioned Zeit outlined the case Skripal and quoted the words of the President that if it really was poison, Sergei Skripal would not have survived.

As you can see, the foreign media often commenting on Putin’s statements on the international situation. However, attention was drawn to the format of the event, and some of the problems identified. In General, the questions on the “straight line” are perceived by the West as an attempt to demonstrate the power of the President. It is noteworthy that approximately the same perceived and other Putin’s speech.