To the “Straight line” with President Vladimir Putin, everything is ready. The President will begin to answer questions and deal with the problems of the Russians at noon Moscow time. 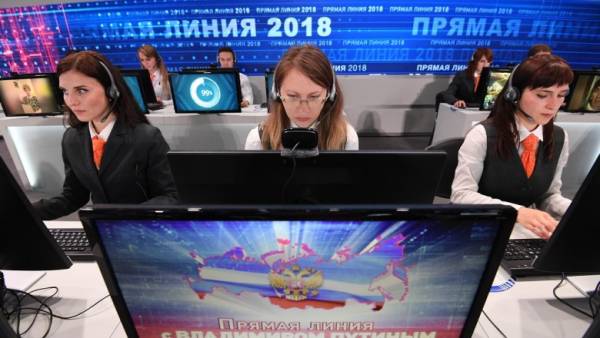 Live coverage of Gostiny Dvor will be to channel “Russia 24” and the website Вести.Ru. Also on our website you can watch broadcasting of sign language. Also the broadcast will conduct the First channel “OTR”, radio stations “Mayak”, “Vesti FM” and “Radio of Russia”.

For Putin, this will be the first “Straight line” after re-election to the presidency and 16th 2001: 11 time he took her as President and four times as Prime Minister.

Appeals are submitted by users of “Vkontakte” and “Odnoklassniki”, where you can send a text question or record a video. Directly during a broadcast to enter a direct video link with the Studio will be users of applications “Moscow — Putin” and “OK Live”.

In the last four years “Direct line” lasted 3 hours 40 minutes to 3 hours and 57 minutes. And the longest is 4 hours and 47 minutes Putin answered questions of Russians in 2013, reminds TASS. During this time the President managed to answer dozens of questions.