How far from reality the movie dinosaurs?

In 1993, a whole generation acquainted with the dinosaurs thanks to the Steven Spielberg film “Jurassic Park”. It is believed that this film ushered in a new era in paleontology, provoking great interest to scientific research of the giant lizards. 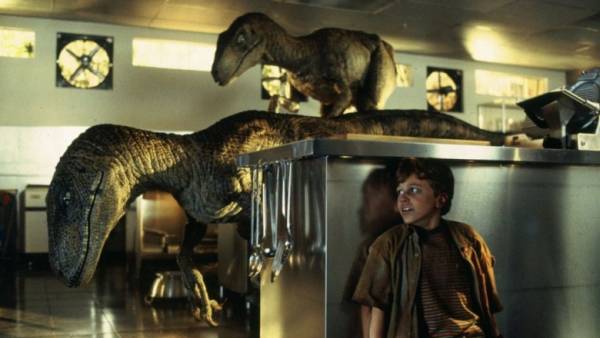 But how scientific were the approach of the filmmakers in the film? And how many new things we learned about dinosaurs in the quarter century since its release in the rental?

As it turned out, the creators of “Jurassic Park” (the literal meaning of the title of the movie) still made some mistakes. Let’s start with the first, lies in the very title of the novel by Michael Crichton on which the film was made.

I think that the “Cretaceous Park” did not fit in sound (in English it’s called the classification of the Cretaceous from the Latin “creta” — “chalk” — approx. edition). But most dinosaurs lived in the Cretaceous period, it’s true.Steve Brunettepleasurelust

Indeed, most of the dinosaurs, which are abundant in the film, including Tyrannosaurus, VelociRaptor and Triceratops lived in the Cretaceous period followed the Jurassic.

The idea of recreating dinosaurs from preserved DNA also proved to be very controversial.

“To clone a dinosaur, you need to have a full genome, but so far nobody managed to get even a fragment of dinosaur DNA, says Brusatte. — So we are talking about something unlikely, if not impossible.”

The dispute about such details may seem inconsequential, but the creators of the film in which dinosaurs play the role of characters, not just monsters, able to hold fine line between scientific certainty and cinematic fiction.

How to build a dinosaur?

In fact — how to recreate an animal that nobody has ever seen, while making it as realistic?

For its time, “Jurassic Park” became a cinematic breakthrough thanks to a combination of computer animation and animatronics.

Responsible for the dinosaurs was appointed a specialist in visual effects Phil Tippett, who worked on “Star wars.”

He was helped by a scientific consultant, paleontologist Jack Horner, but Tippett in the course of the film has become a serious expert on dinosaurs.

“I bought all the books about dinosaurs that have just been released, so I was aware of the latest scientific theories in this area,” he says.

Tippett had to change some things in the script, several departing from the text of the novel.

At Crichton t-Rex was lifted in the air jeep like a Godzilla. So I had to say no, it will not do, simply because it is physically impossible.Phil Typedplural visual effects

“And yet he was very close to reality — emphasizes Brusatte. In my opinion, this is the most accurate depiction of a Tyrannosaurus Rex at that moment.”

“Today we know that Tyrannosaurus Rex had very good eyesight, so even if you froze motionless, it would still get noticed — so we can’t lose him. In addition, he had a great sense of smell and excellent hearing. But all this we found out after there have been several CT brain of a dinosaur, and this became possible only after 2000,” says the paleontologist.

Computer modeling also showed that Tyrannosaurus could hardly reach a speed above 20 km/h Is still faster than a human, but the Raptor wasn’t ready for a long pursuit of prey, so try to escape from it makes sense.

Having only the fossilized remains of creatures disappeared from the face of the Earth thousands of millions ago, it is very difficult to imagine how it moved. So the team Tippett watched the animals resembling the species of dinosaurs that they had to “revive” on the screen.

They watched the elephants, to get an idea about the movements of giant and long-necked Brachiosaurus, or ostriches — to understand, moved as swift gulimim.

Velociraptors, however, looked in reality quite differently- not as they are represented in the film.