The Crimea, Syria and photos of Siberia: what Putin said in an interview with ORF

The Russian President talked with an Austrian journalist on the eve of the visit to Vienna. 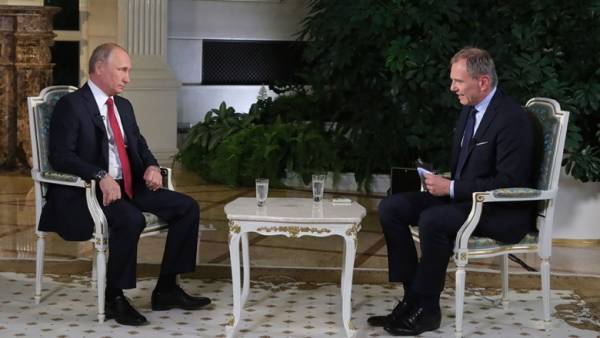 Russian President Vladimir Putin will conduct on Tuesday a working visit to Austria, during which it will discuss key issues of bilateral and international agenda. On the eve of the Russian President answered the questions of the presenter of the Austrian broadcasting company ORF Armin wolf. TASS has selected the most important quote of Putin from that conversation.

About the relationship with Vienna

We have Austria a long-standing, very good, deep relationships. Austria is a traditional and reliable partner in Europe. Despite all the difficulties of previous years, with Austria we have never interrupted dialogue nor in politics, nor security, nor in Economics.

About “section of the European Union”

About an arms race

In a recent telephone conversations and the Donald [trump] said he was concerned about a possible new arms race. I fully agree with him.

But in order to prevent a possible arms race, and we are not the initiators of this development, as you know, we came out of the ABM Treaty, we only respond to threats, which therefore for us there, but I agree with the President of the United States — we need to think about it, has something to do with it, give instructions to the ministries of foreign Affairs, our Ministry of foreign Affairs and the US state Department.

About the events in the Crimea

Our soldiers always were there. I said, where our soldiers were, they in no way participated. But when the spiral of unconstitutional actions in Ukraine began to twist, when people in Crimea feel threatened, when they already trains began to send the nationalists, began to block the buses and road transport, people have the desire to defend themselves. And the first thing that came to mind, to restore their rights that have been obtained in the framework of the Ukraine when Crimea got the authority. This actually all began, began the process in the Parliament to determine their independence from Ukraine.