MOSCOW, June 5. /TASS/. The head of the Moscow municipal district “Tver” Jacob Yakubovich became the winner of the preliminary vote (the so-called primaries) of the party “Yabloko” on the nomination of the candidate in mayors of Moscow. This was announced at the end of counting of votes. His opponent was the Chairman of the Moscow branch of the “Yabloko” Sergei Mitrokhin. 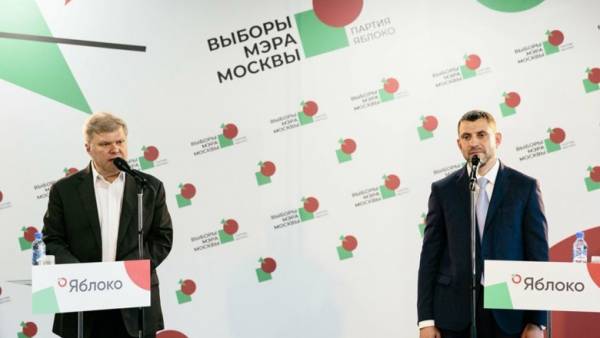 Yakubovich in 2017 was nominated by Yabloko candidate to the municipal Council and after a victory on elections was headed by the municipal district “Tver”.

Preliminary voting started on 27 may and was held in two rounds. The first round closed on 29 may, was attended by 21 candidates. None of them scored more than 50% of the votes in the second round out Yakubovich and Mitrokhin. As electors, the party has identified 22 categories of citizens (a total of more than 4 thousand persons) among which members of the Moscow branch of the party, elected municipal deputies and candidates, supporters, party members of election commissions and election observers, journalists, experts and opinion leaders.

Victory Jakubowicz demonstrates the update request, the Chairman of the party Emilia Slabunov.

“The update request of the Moscow “Yabloko” was manifested in the results of the primaries. Now the task of the Moscow city branch to nominate the winner and prepare for elections,” she said, noting that with the help of candidates winner party signals about their openness to new people and willingness to push them in the election.

“We give a signal that the party is an open party, which seeks to upgrade, willing to accept new people who are ready to nominate new candidates [for the elections], the alternative to the “young technocrats”, which promotes power,” said Slobounov.

The winner of the primaries according to the party Charter, first approved by the Federal office as a candidate in mayors of Moscow, and then his candidacy will be officially nominated by the conference of the Moscow branch of the party.

Elections of the mayor of Moscow will take place in September 2018. The necessary number of votes to overcome the “municipal filter” for the registration of the candidate in mayors of Moscow and the party “United Russia”.

The winner of the Moscow primaries “Apple” was the head of the Tver district of Minsk Jacob Jakubowicz. He received 58% of votes in the second round of primaries.

From the minute Jacob Jakubowicz will give a briefing for journalists. Watch the broadcast here – https://t.co/Og206F5GkV pic.twitter.com/D0Cb8OEwM7